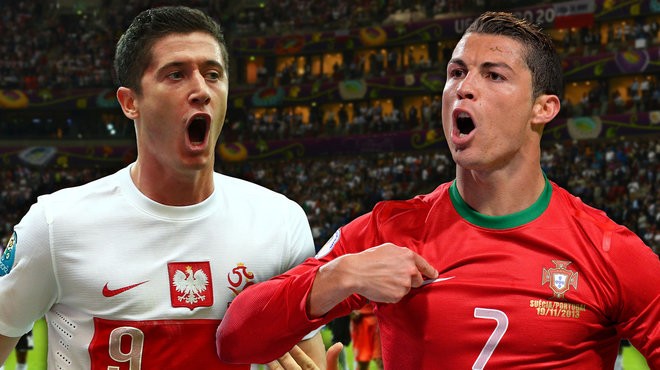 When Poland take on Portugal in the first quarterfinal at Stade Velodrome in Marseille, the whole world will keep an eye on two of the finest forwards of this generation, Cristiano Ronaldo and Robert Lewandowski.

Ronaldo started his career as a winger who operated mainly from the right. He had (and still has) a frightening pace and used to torment defenders with his dazzling skills. Following a move to Manchester United, and especially under the watchful eye of Sir Alex Ferguson, he gradually developed himself into a matured forward.

The technique was always there, it only got better, but where he went a massive change is in his understanding of the tactical side of the game. Not only he improved on his positional awareness, did learn to play across all positions up front, but he was now being able to score plenty of goals and creating for others as well.

With the passage of time at Real Madrid, Ronaldo has transformed his game completely. Gone are those days of flashy moves and crazy dribblings, instead he has turned into a great goal scorer. The boy from Madiera has scored over 50 goals in each of his last six seasons compared to 30-average prior to that shows his massive transformation.

Lewandowski, on the other hand, is a typical #9. The boy Polish supporters lovingly call as ‘Bobek’ has a similar background to Ronaldo. Like the Portuguese, he has had a difficult upbringing and lost his father when he was just 16. He was so thin and lanky that many thought he could do a better job as a runner. Little they knew one day he would become Poland’s poster boy and one of the best strikers in the world.

Unlike Ronaldo, who already grabbed the media limelight at an early age due to his high-profile move to Manchester United, very few or hardly anyone knew about Lewandowski when he started his playing career.

In the summer of 2010, Jurgen Klopp, then Dortmund manager signed a ‘hidden gem’ out of nowhere. He needed a striker to replace Lucas Barrios and took a gamble with an ‘unknown element’ Lewandowski. He was initially forced to play at no 10, a role that he didn’t like but a year later he understood how much it helped him developing into a complete player. Klopp made him the striker what he is today.

‘You have become a better player. Then I realised why the coach had asked me to play as a No.10; he made me a more complete player,” said Lewandowski in an interview last year.

Lewandowski was slowly becoming a star in Dortmund but the entire world took notice of him seriously when he scored four goals against Cristiano Ronaldo’s Real Madrid in the Champions League some three years back. No more was he seen as a ‘talent’. He etched him name into “world class” category.

Both Ronaldo and Lewandowski are different types of forwards with different types of skillsets. Ronaldo, in general, is very good at dribbling and his strength lies in acceleration. His ball control is immaculate and at 31 he is still capable of beating players with pace, sharp dribbles and strength easily. Lewandowski is a typical modern day striker who brings lot more to the game than just simply scoring goals. Unlike Ronaldo, he doesn’t get a free role especially when he is playing for his country where he often drops deep to make room for other forwards. He is not a great dribbler but his close control is excellent and can make room for himself and move forward at a pace even within a cramped space.

Both of them are very good at shooting from distance and are equally brilliant with their headers. Ronaldo has this unbelievable capability to head a ball from spot jump. It requires a very dificult skill-set and not many players in the world is good at that like the Portuguese. The interesting thing about Ronaldo’s heading technique is how accurately he gives direction to the ball despite jumping so high from a spot. Lewandowski’s biggest strength is his situational awareness and the timing of his jump is almost perfect everytime and that’s why he scores a lot of goals through headers.

Lewandowski has scored 42 goals for Bayern Munich in 2015/16 including five goals against Wolfsburg in the space of just eight minutes and 59 seconds. While Ronaldo is a goal machine, but Lewandowski is probably more of a natural finisher.

Interestingly, both these forwards have had struggled in Euro 2016 so far. While Ronaldo have scored twice against Hungary and provided an assist for Quaresma against Croatia, Lewandowski so far has yet to open his account. His did create some lovely goal scoring opportunities for his striker partner Arkadiusz Milik but apart from that he has had a very dull campaign.

Polish supporters are already proud of their team for making it to the quarterfinals and probably they won’t be disheartened too much if they lose to Portugal. But one thing is for sure, the fans will surely feel bad if Lewandowski fails to score a single goal in Euro 2016.