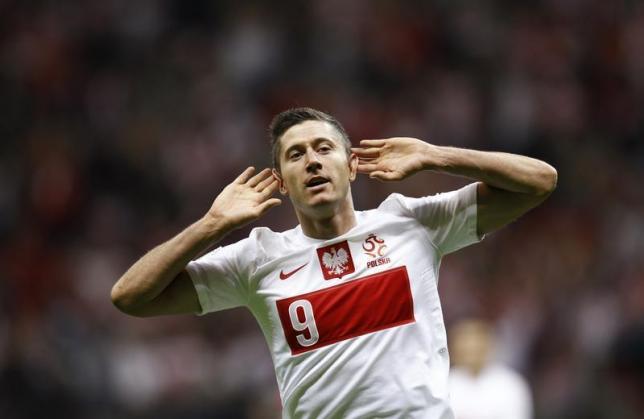 With 25 points from a possible 30, Poland comfortably made it through to Russia, the first time they have reached the World Cup since 2006.

In Robert Lewandowski, they have a genuine world-class player on their hands and he demonstrated as much by top scoring in the European section of qualifying.

He will be key to their hopes in a group in which Colombia and Senegal should present tough competition for first place.

Boss Adam Nawalka has selected a huge 35-man preliminary party which needs to be cut by 12 on June 4.

There is a good mix of experience sprinkled with some promising youth talents in there, but more will be gleaned once the final 23 are named.

With 35 players named in the preliminary party, it is difficult to select a significant absentee
until 12 are cut at the end of the weekend.

Nawalka guided Poland to their first European Championships quarter-final in France two years ago and stated at the start of qualification that he expects the team to equal that achievement at this summer’s World Cup.

The 60-year-old made 34 appearances for his country during his playing career and represented them at the tournament in Argentina in 1978.

Whilst some would argue that Lewandowski’s presence makes up for deficiencies elsewhere, in fact Nawalka has cultivated a team that has a solid spine running throughout and are prepared to live up to their tags as dark horses in Russia.

After relying heavily on a flexible 4-2-3-1 shape for much of qualifying, Poland have since
experimented with a 3-4-3 in friendlies but results have been mixed.

Nawalka will likely return to a back four for the group opener against Senegal, but he has a headache between the sticks with Wojciech Szczesny and Lukasz Fabianski vying for the number one shirt.

Some big players, such as Grzegorz Krychowiak, Jakub Blaszczykowski and Kamil Grosicki, did not enjoy strong seasons and as such there may be a few selection issues to resolve.

Lewandowski is the focal point of the team and they will look to find him with crosses and through balls whenever possible.

The Bayern Munich star is the darling of Polish football but flattered to deceive at Euro 2016, where he was picked out as one of the potential players of the tournament yet did not manage a shot on target until the knockout stages.

This is Lewandowski’s first World Cup and he comes into it having bagged 41 goals at club level this term.

Confidence is never an issue for the 30-year-old hitman; the question will be whether his team-mates can provide him with service against top-class opposition.

The youngster could be Lewandowski’s heir in the Poland team and showed great promise in his first season with Sampdoria in Serie A.

Kownacki is similar in build to the former Borussia Dortmund man, holds the ball up well and looks to get on the end of crosses.

Eight goals in 24 appearances, just seven of which were starts, during his sole campaign for the Italian side have marked him out as a huge prospect and he may well be a useful substitute if the Poles are chasing a game.

Whilst Group H is not the most glamorous on paper, it contains four teams with realistic
ambitions of qualification.

Poland would expect to battle it out at the top with Colombia, but Senegal cannot be dismissed and Japan will also hope to cause a stir with the eyes of the world watching.

If all play to their potential then this could be one of the most interesting groups in the
competition.

First place is the target for Poland but they must be on their game and avoid complacency
to capitalise on what is a massive opportunity to progress.