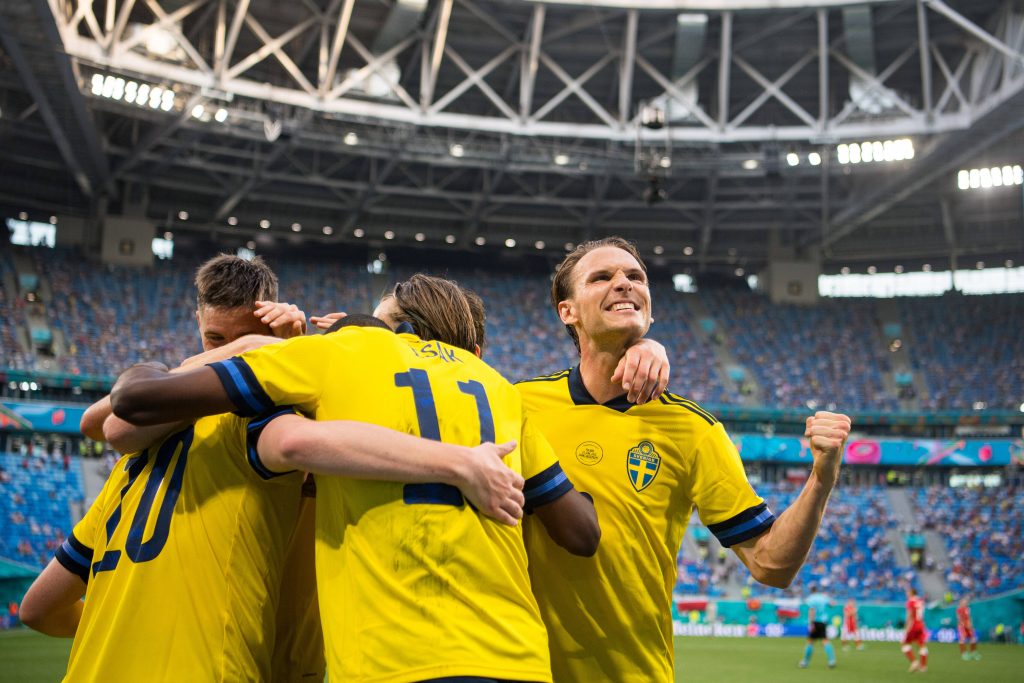 Sweden secured top spot in Group B with a thrilling 3-2 victory over Poland at the European Championships on Wednesday.

Poland went into the game needing a win or they’d be eliminated, and they made the worst possible start.

Alexander Isak bundled the ball through to Emil Forsberg, who finished into the far corner with his weaker left foot via a small deflection.

But they responded well to going behind and really should have been level in the 18th minute.

Robert Lewandowski saw his header crash back off the crossbar, but the rebound fell perfectly for the Bayern Munich forward.

With everyone expecting to see him nod home from close range, he somehow hit the crossbar again before it was cleared to safety.

Shortly before half time, Paulo Sousa’s men had another opportunity to equalise. Piotr Zielinski exchanged passes with Lewandowski before letting fly from distance, but Robin Olsen was there to turn over for a corner.

Poland went in at half time with 64% possession, six attempts to Sweden’s one, and eight corners to Sweden’s two. However, they were still behind in the main statistic.

The second half began in end-to-end fashion, with both goalkeepers being forced into action.

Olsen was at his best to deny Grzegorz Krychowiak and Zielinski again, while Wojciech Szczesny palmed away a strike by Robin Quaison.

Just before the hour mark, Sweden notched again, appearing to end the game as a contest.

Substitute Dejan Kulusevski went on a mazy solo run before laying off to Forsberg, who slammed home at the near post.

But Poland hit back almost immediately. Zielinski fed Lewandowski, and the forward cut onto his right foot and bent a cracker into the top corner.

Not long afterwards, it seemed as if they had levelled when Jakub Swierczok turned in from close range. However, the celebrations were cut short by an offside flag.

But in the final ten minutes, Poland were level, and it was Lewandowski again. Przemyslaw Frankowski’s cross evaded two Swedish defenders and found the 32-year-old free in the middle, and he made no mistake.

This set us up nicely for a tense final few minutes. Sweden had dropped to second in the group, while Poland were just a goal away from progressing through to the knockouts.

There was one last goal in the game, and it came for Sweden. Kulusevski was the creator again, slipping in Viktor Claesson, who finished in at the near post to retake the lead in injury time.

The win ensures that Sweden top their group. They will face Finland or Ukraine in the round of 16. As for Poland, they have been eliminated in the group stages for the second tournament in a row.

Robin Olsen (7/10) – Produced a few good saves. Can’t be blamed for either goal.

Mikael Lustig (6/10) – Didn’t do much in attack but defended well enough.

Victor Lindelof (6/10) – Kept Lewandowski quiet for the first hour but struggled after that.

Ludwig Augustinsson (6/10) – Most of the Polish threat came down the opposite side. Did his job effectively.

Sebastian Larsson (6/10) – Had the energy of a much younger man but didn’t produce a whole lot going forward.

Albin Ekdal (7/10) – Energetic and good on the ball. A solid performance.

Kristoffer Olsson (7/10) – Made a couple of cracking tackles and was always involved.

Robin Quaison (5/10) – Had one shot well saved. Quiet otherwise. Subbed off on 55 minutes.

Alexander Isak (6/10) – Hard working and influential in the opener, but noticeably worse than his previous performances.

Wojciech Szczesny (6/10) – Rarely forced into action. Couldn’t do much about the goals.

Bartosz Berezynski (6/10) – Didn’t let a whole lot past him down his side. Didn’t contribute much in attack.

Jan Bednarek (6/10) – Handled the physical threat of Isak reasonably well but could maybe have done better for the opening goal.

Kamil Glik (6/10) – Managed to keep the Sweden strike partnership at bay but struggled against Forsberg.

Kamil Jozwiak (5/10) – Didn’t do enough going forward. At fault for the opening goal.

Grzegorz Krychowiak (7/10) – Composed in the middle and won the ball back a few times. Had one shot from range well saved.

Mateusz Klich (7/10) – Had some nice touches in midfield and helped Poland dominate possession.

Tymoteusz Puchacz (6/10) – Offered something down the left. Substituted at half time.

Karol Swiderski (6/10) – Got on the ball a fair few times but didn’t create enough with it.

Robert Lewandowski (9/10) *MOTM* – Did all he could to take his side through. Missed an early sitter but more than made up for it with two goals. Always looking to make something happen.

Piotr Zielinski (7/10) – Linked up well with Lewandowski and got a lovely assist.