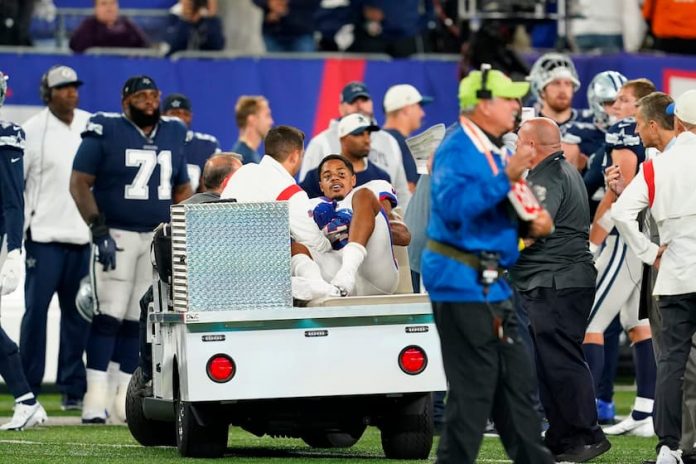 Some NFL players are calling for the NFL to get rid of all turf pitches due to several non-contact injuries occurring each season. Sterling Shepard is a recent example after he tore his ACL on Monday night.

New York Jets defensive tackle Solomon Thomas recently shared his sympathy for Shepard. Thomas can relate after he tore his ACL in 2020 at the MetLife Stadium while he was a member of the 49ers in a game against the New York Jets.

The defensive tackle believes it’s time for the NFL to make a change: “I believe in the NFL we shouldn’t have turf fields; I believe we should have grass fields like the Premier League in England.

“The risk of non-contact injury is significantly higher on turf fields… I believe as players we should be protected better.”

During the game Thomas tore his ACL there were also several other injuries. Edge rusher Nick Bosa tore his ACL and quarterback Jimmy Garoppolo injured his ankle. Thomas blamed his injury on the turf, saying his foot got caught in it as he was being blocked and did not give when his knee twisted.

“In this sport, we have enough contact injuries, so we should eliminate as many non-contact injuries as we can. That’s my belief on it. I’m hoping to one day have the league be all grass fields. Until we get there, we’ll keep fighting for it.”

Thomas wasn’t the only player to voice his anger on turf fields following Sterling Shepards injury. Odell Beckham Jr. produced a vocal tweet stating his anger on this type of field.

Just get rid of it all the fkngether bro. Billions made off this game I can’t understand why we can’t play on grass. That shxt is rough. Prayers up for my brother. Shxt just hurt my heart 🤕

Last year Giants safety Logan Ryan ripped into the turf: “We’ve really got to talk about these turf fields, it’s just not best for a player’s safety. It’s too many lower-body injuries. It’s unfortunate going into a contract year.