Portuguese goalkeeper Joel Pereira is all set to return to Manchester United after his loan spell at Belenenses was cut short following a request from Jose Mourinho.

A Bola are reporting that Pereira has already said his goodbyes to his teammates and the fans. Pereira was pictured taking selfies with the Belenenses fans and is expected to join up with the Manchester United first team soon. 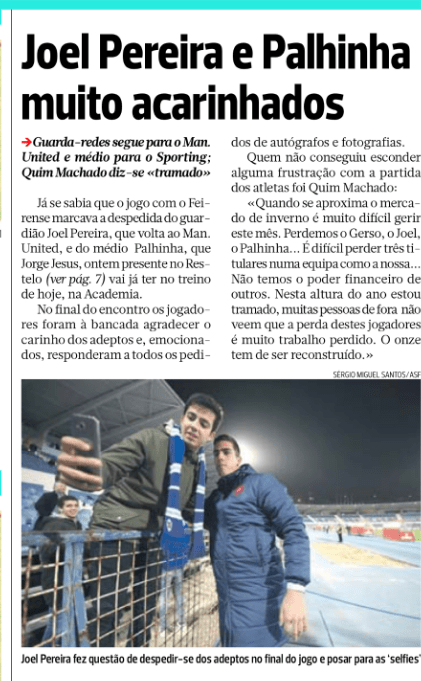 The 20-year-old youth player was sent out on loan to gain some valuable first team experience, but the impending loan departure of Sam Johnstone has forced the Red Devils to bring him back to the club as their new third choice keeper.

Earlier there were reports that Mourinho personally requested the Old Trafford outfit to cancel the loan agreement and it seems that the Portuguese manager has got his way now.

The 20-year-old has impressed during his time at Belenenses and was being monitored by the likes of Benfica. However, he has a contract at Old Trafford until 2020 and a permanent move away from Manchester United is out of the question for now.

Pereira is unlikely to get any game time ahead of De Gea and Romero this season. Therefore, it will be interesting to see how Mourinho handles his progression between now and the end of the season. The Portuguese keeper is highly rated by the coaching staff at Old Trafford and is seen as an important part of the club’s future.