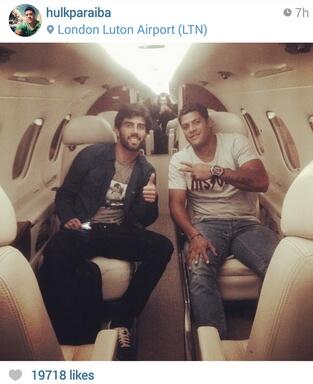 Zenit Saint Petersburg striker Hulk has shared a photo of him flying to London, sparking rumours of a potential move to the capital.

The photo appeared on the player’s ‘Instagram’ page last night, but it seems as though the Brazilian’s visit was merely part of a stopover period on his way to Portugal.

Hulk’s not signing with Chelsea. He’s just going to visit Porto on his Russian League holidays and did a stopover at London.

Predictably though, the image has sent the transfer rumour mill into overdrive.

The likes of Chelsea and Tottenham have long been linked with a move for the former Porto striker, especially when his former boss Andre Villas-Boas was in the loop, with the striker previously expressing his wish to reunite with the now unemployed Portuguese.

BBC journalist Ben Smith mused yesterday that Chelsea may not be finished in this transfer window, despite closing in on the signing of Mohamed Salah,

Salah may not be the last one in the door at #CFC. Busy at the Bridge

Arsenal are in the market for striking reinforcements after the loss of Theo Walcott through injury.

The Gunners were said to be interested in Hulk back when he played for Porto, and a move for the unsettled striker, perhaps on loan, could be an attractive option for Arsene Wenger this month.

Hulk, 27, moved to Russia in 2012 for a fee of around £40m, but has failed to fully settle in Eastern Europe, prompting rumours that he will soon be departing the club or pastures new.

Back in March last year, Hulk admitted his desire to play in the Premier League in the future,

‘My future? I love the Premier League,’ said Hulk (via the Metro),

‘The Premier League is a great competition with great clubs. If I have time, I watch the matches on television.’

But it seems that the above photo is nothing more than a ill-advised upload from the attacker, not realising the tendency of football fans to take such an image as telling evidence of an impending transfer. He can hardly blame us though!

What do you think? Will Hulk eventually come to the Premier League? Would you like to see him at your club? Let me know in the comments below…