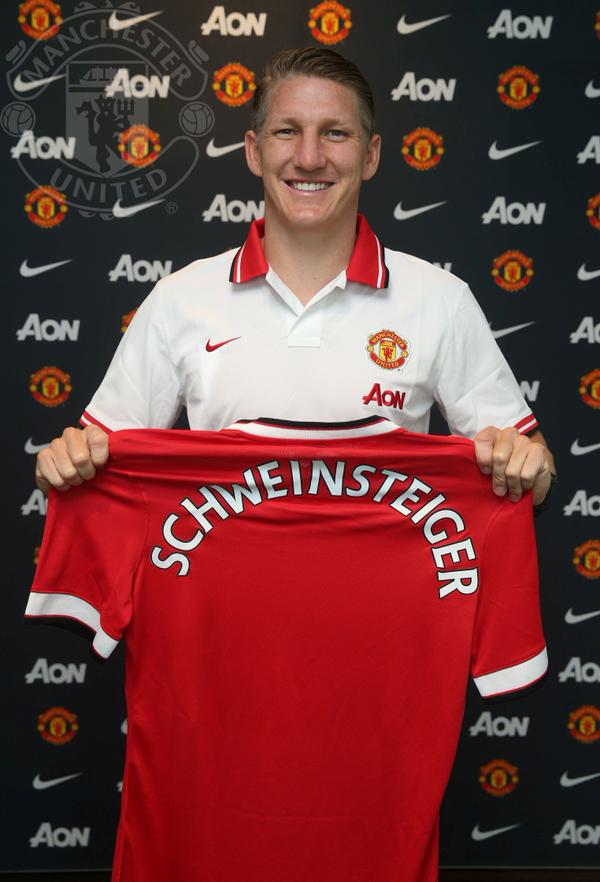 The Germany skipper will sign a 3 year deal at Old Trafford and expressed his delight at signing for such a big club.

Louis van Gaal on Schweinsteiger: “He brings a wealth of experience and is an excellent addition to our squad.” pic.twitter.com/BXnFgSsDxN

United agreed a £15m deal to sign the German and Schweinsteiger becomes the first ever German to play for United’s first team.

The World cup winner becomes the third summer signing for the Reds alongside Depay and Darmian and has now been unveiled at Old Trafford before the Red Devils jet out for their pre-season tour.

#mufc is delighted to announce the signing of @BSchweinsteiger from Bayern Munich on a 3-year contract. #WelcomeBasti pic.twitter.com/jGcC2K1HLD

Bastian Schweinsteiger said: “I have thoroughly enjoyed my time at Bayern Munich, it has been an incredible journey and I didn’t take the decision to leave lightly. Manchester United is the only club that I would have left Munich for. I feel ready for this new and exciting challenge in what I regard as the most competitive league in the world and I am looking forward to working with Louis van Gaal again.

“I will never forget my time at Bayern Munich and I would like to thank everyone at the club and the fans for the great memories.”

The manager reflected on the signing and explained how the Germany international could be the key next season.

Louis van Gaal said: “Bastian is, of course, no stranger to me. I worked with him during my time at Bayern Munich and I am truly delighted he is joining Manchester United. His record speaks for itself; he has won every honour at club level and was a major part of the successful Germany World Cup-winning team last summer.

“Bastian is the ultimate professional and there is no doubting his talent and his ability to control games. He brings a wealth of experience and is an excellent addition to our squad.”

Schweinsteiger’s addition brings a lot of quality and Champions League experience for Manchester United. If the midfielder can stay fit for most of next season, Van Gaal will have some player on his hands.