A report in today’s Guardian claims that current Bayern Munich boss Pep Guardiola wants to manage Manchester United some day. In his new book titled “Pep Confidential: The Inside Story of Pep Guardiola’s First Season at Bayern Munich“, the Spaniard has revealed that he wants to take up the reigns at Old Trafford at some point in his career. 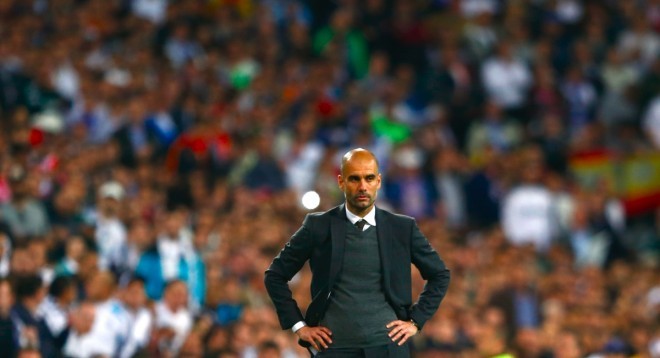 This is not the first time that the former Barcelona manager has expressed his wishes. In 2011, Guardiola appeared to have been bowled over the amazing atmosphere at Old Trafford. Marti Perarnau, Guardiola’s close friend and journalist recalls the day in May 2011 when the pair sat on the stands at Old Trafford as the Red Devils took on Schalke.

Guardiola later claimed to his assistant, “I like this atmosphere. I could see myself coaching here one day.” However, the report claims that Pep had accepted to take over from Jupp Heynckes at Bayern much before Sir Alex Ferguson announced his retirement.

Perarnau in his new book also claims that both Chelsea and Manchester City were keen to appoint Guardiola before he joined Bayern Munich. He says, “During his sabbatical year in New York, the job offers poured in. His ex-colleague, Txiki Begiristain, the director of football at Manchester City, was very insistent.”

“He also met up in Paris with Roman Abramovich, who was prepared to do anything to lure Pep to Chelsea. Within a few months Pep, had chosen Bayern.”