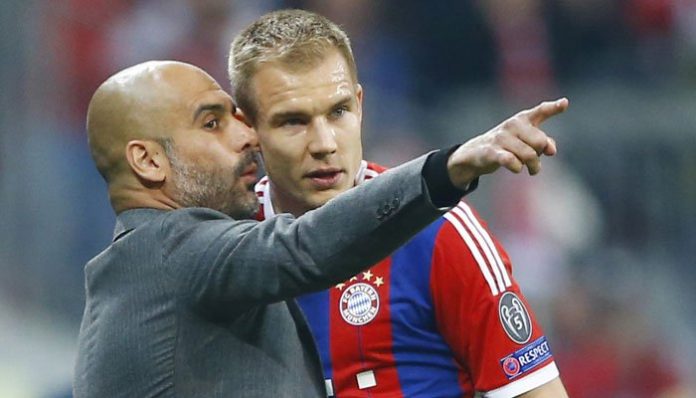 Manchester City manager Pep Guardiola has admitted his side are short of defensive options for the remainder of the season. Sky Sports are reporting that he is considering a move for Bayern Munich’s Holger Badstuber in January.

Guardiola worked with Badstuber during his three years at Bayern Munich. The 27-year-old has played for Bayern throughout his career. He is a versatile defender, capable of playing as a centre-half or a left-back.

However, Badstuber has seen much of his career disrupted by injury. A cruciate ligament rupture kept him out for around a year-and-a-half from the end of 2012, and he has suffered multiple setbacks since. He made the last of his 31 appearances for the German national side back in 2015.

Guardiola will therefore be looking at a short-term deal for Badstuber. The Spaniard is concerned that he can only rely on John Stones, Nicolas Otamendi and Aleksandar Kolarov in central defence. Captain Vincent Kompany is yet to complete a full 90 minutes so far this season.

With City fighting for trophies on three fronts following Friday night’s resounding 5-0 FA Cup victory over West Ham, a loan deal for Badstuber until the end of the season may suit all parties. Guardiola conceded as much in his press conference post-West Ham, although a deal is far from done.

“We are evaluating if there’s a chance to take one (defender). I know Holger, he’s a fantastic player, a fantastic guy, but he’s a Bayern Munich player, and we should first of all speak with them and with him.

“Now, on the table, there are no names because we had a lot of games. But now we have 10 days until Everton, so we have time to discuss with Txiki (director of football), with the club, what is the best for the rest of the season.

“We have to speak about the situation. When we arrive now in the Premier League, in the FA Cup, in the Champions League, if something happens with the injuries we don’t have enough.

“We have Nico [Otamendi], John [Stones] and [Aleksandar] Kolarov. Kolarov is a full-back, and of course we have Tosin [Adarabioyo], but Tosin is still young. Hopefully Vincent [Kompany] can help us, but Vincent in the last two years he was like this [with injuries].”