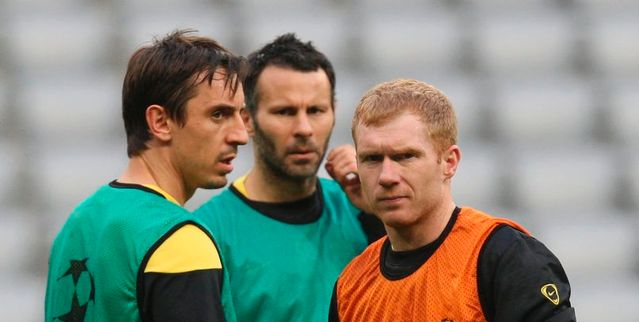 The old conundrum of player loyalty has somewhat been diminished by the flamboyance of modern day footballers wreaking havoc with their multi-million pound wages. Season after season, transfer windows here and there, it is somewhat impossible to envisage stars not flocking from club to club in mega coups where the benefits are reaped by both parties.

With player loyalty becoming more of a rarity nowadays, Soccerlens has decided to look at 20 of football’s most loyal one-club stars – past and present.

At the ripe old age of 37, and yet still teasing Premier League defences with his articulate flamboyance and technical flair, Ryan Giggs is a credit to both himself and his club Manchester United. He has arguably established himself as The Red Devils’ greatest ever player and recently overtook the great Sir Bobby Charlton’s league appearance record against Liverpool – his 607th appearance in the Premier League.

Spanish superstar Xavi Hernandez, a player with the world at his feet, made a declaration in the summer of 2010 saying that Matthew Le Tissier was one of his idols growing up as a youngster back in Catalonia. Despite never fulfilling his potential at an elite entity, he orchestrated some of the most beautiful pieces of technical genius in the red and white stripes of Southampton. The attacker made a total of 540 appearances for The Saints and netted 210 goals.

The winner of five European Cups and umpteen Italian domestic titles in the black and red of AC Milan, Paulo Maldini has implemented his name into the club’s grand old history as one of its all time greats. He is an Italian icon who made over 900 appearances for the Rossoneri in his 24 years at the club. He was a marvel in his position and was taken under the wing by the great Franco Baresi who he helped mould into one of the greatest defenders of his generation.

The lion heart of AS Roma. The proclaimed Gladiator epitomises everything about the Giallorossi who wears his heart on his sleeve for the cause of his hometown club. He was an integral part of the side under the stewardship of Fabio Capello that captured the club’s first Scudetto for eighteen years in 2001. At 34-years of age he is currently adorning the captain’s armband having recently made over 600 appearances for the club.

The recently deceased Nat Lofthouse will go down as one of English football’s most loved and revered centre forwards.  Nat spent his entire career at Bolton Wanderers where he netted a brace as captain in the 1958 FA Cup Final against Manchester United – their first cup since 1929. He also scored an impressive 30 goals in 33 appearances for his country in an eight year period.

The beloved Gooner made just fewer than 700 appearances for Arsenal Football Club in a career that was littered with honours and accolades. Despite his ups and down during his twenty-two years at the North Londoners, Adams established himself as one of the club’s most decorated and revered stars in its history. His goal in particular against Everton on the final day of their 1998 Premier League triumph at Highbury is seen as one of his most memorable moments as he succumbed to the embraced jubilation from his peers.

Arguably the greatest ever to adorn the black and white stripes of Juventus. Alex Del Piero has done it all for both his club and country with world and European honours as well as racking up a total of 680 appearances for the Old Lady and even contemplating a further year with the club at the age of 36. His role of playing off the shoulder of a talisman up top has seen him bag a staggering 280 goals in an eighteen year stint.

A man who is currently the orchestrator of two of the world’s most spectacular footballing sides, Spain and Barcelona, Xavi Hernandez is arguably the best in the world at what he does. A revered central midfielder whose passing matches that of a paint brush to a canvas, has spent the entirety of his career thus far at the Blaugrana. At 31-years of age he has made over 500 appearances for Barca and that number will undoubtedly get a whole lot bigger by the time he hangs up his boots.

Undoubtedly Italy’s finest central defender, Franco Baresi spent the entirety of his beautiful career at the San Siro with AC Milan. With all the defensive attributes needed to stamp his name into the folklore of the sports rich history, Franco won just about everything and anything for the Rossoneri as well as his country.

He spent twenty years at the Milanese club and racked up over 700 appearances that included three European Cups and six Scudettos.

Internazionale enjoyed beholding Giuseppe Bergomi for two decades between 1979 and 1999. The tough tackling central defender is the Nerazzurri’s record appearance holder having made 757 outings where he won a Scudetto and three UEFA Cups.

He was also part of Italy’s 1982 World Cup winning side.

The name will be more familiar to younger fans of the infamous stadium where Real Madrid play their home games – correct. However the club didn’t just name their beautiful home after just anybody, Santiago Bernabeu’s role at the club in the early 1900’s helped transform The Whites into Spain’s most recognisable and successful institution in its domestic football.

Of course they would later go on to conquer the European Cup, a tournament that today is arguably the biggest in the world, the UEFA Champions League, which had its foundations laid by Santiago back in the fifties. He was a real pioneer of European football.

Scotsman Billy McNeill will not only go down as a legend in Celtic’s history but he will also be remembered as the first British player to lift the coveted European Cup where The Hoops beat Internazionale in 1967. ‘Cesar’ is loved by those affiliated to the club and was voted by the fans as their greatest ever captain.

He made just fewer than 800 appearances for the club in his eighteen playing years.

Not only did Thomas Schaaf spend the entirety of his playing days at Werder Bremen, he has also been at the helm as their Coach since 1999 where he’s brought success just like he did as a player. The German won two Bundesliga titles whilst playing as a defender and also landed their latest league title in 2004 as Coach.

He is a true one club man.

One of the most flamboyant goalkeepers in the games modern history (then again he is Brazilian), Rogerio Ceni has made over 950 appearances for Sao Paulo. At the age of 38 he is still adorning his gloves and has incredibly scored 100 goals with a knack for netting free-kicks and penalties. He is a FIFA World Cup winner with Brazil and has won two Copa Libertadores with Tricolor Paulista.

Brother of Sir Bobby, big Jack Charlton spent his entire playing days at northern giants Leeds United. He won a domestic league title along with an FA Cup at Elland Road and was an integral part of England’s 1966 World Cup triumph on home soil. He made over 600 appearances for The Whites and is renown as one of the club’s all time greats.

His name will be forever known by the fans of Blackpool Football Club where he has a stand named after him at Bloomfield Road and rightfully so. Jimmy gave all seventeen years of his playing days for The Tangerines as a right-back, registering over 600 appearances.

He was part of England’s World Cup winning squad back in 1966 where he made 43 appearances for his nation.

Regarded as one of the greatest goalkeepers of all time, ‘The Black Spider’ won the USSR championship five times whilst at Dynamo Moscow. His cultural impact on the sport as well as his country has been monumental. He is possibly the greatest ever in his position with his performances for the Soviet Union in three World Cups (1958, 1962, 1966) catching the gazing eyes of the world.

Technically gifted Paul Scholes is possibly England’s most talented midfield man of his generation. With his hawk like vision and passing prowess being of the highest calibre, Scholes’ traits have seen his club Manchester United reap the benefits. The 36-year old has been an integral figure in the club’s rise to the top of English football in the last two decades and continues to mesmerise his adversaries on the pitch with his match winning outings.

Much like his former Manchester United teammate Paul Scholes, the recently retired Gary Neville spent the entirety of his career at Manchester United. He is possibly the greatest right-back in Premier League history. He formed a wonderful understanding with David Beckham down the right-hand for the Manchester side before the aforementioned moved to Real Madrid in 2003.

Neville made just over 600 appearances and won nineteen major honours.

Billy will be infamously remembered by those outside of Wolverhampton as the first player to reach 100 international caps for his country. He also captained England a record 90 times and along with Bobby Moore he is considered his country’s greatest skipper. He spent the entirety of his career at Wolves who have a statue of the great man outside Molineux. He made 541 appearances for the club and won the FA Cup as captain in 1949.