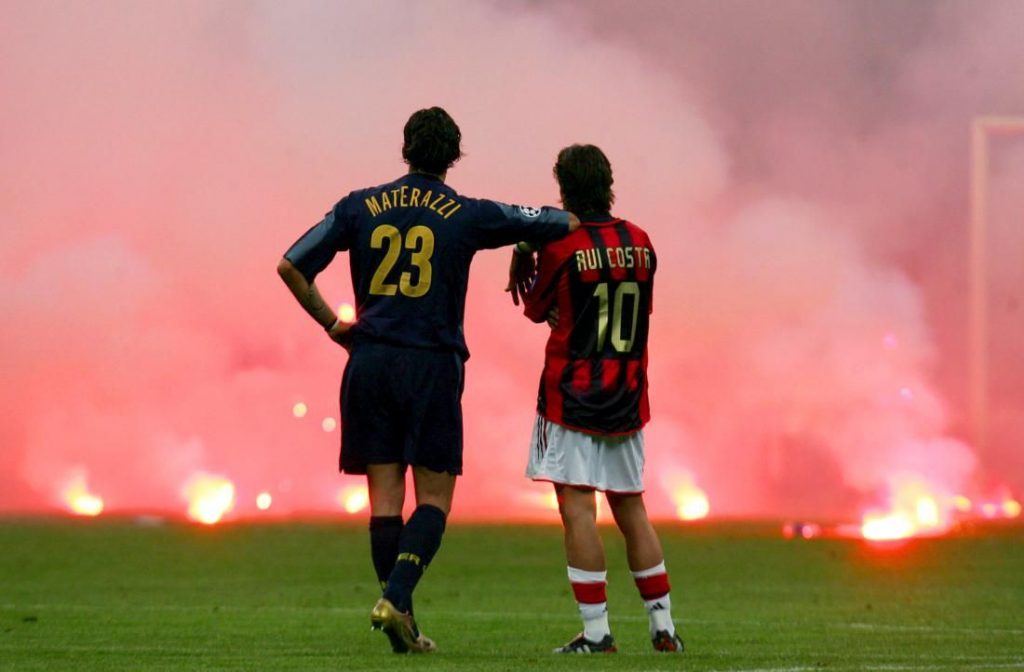 The Milan derby is probably one of most famous and heated football rivalries worldwide. Here, we look at the history of football in Milan, how Inter and AC split, and all the legends that have called San Siro their home.

Football, as we know it, is a game defined by rivalries and histories between clubs that contest it. But, what happens when your biggest rivals play their home games at the same stadium as you?

This is the story of arguably two of the biggest names in Italian football. The identity, community, city and the stadium is all the same for these two clubs.

You may have heard of AC Milan as the team that boasted a roster featuring the likes of the iconic Italian legends- Paolo Maldini, Inzaghi, Gattusso, Pirlo and the Inter side boasting the likes of Diego Milito, Samuel Eto’o, Zanetti and Snejider, all of them having won European Titles in the 21st century itself.

Let’s dive in and look at the Milan derby in more detail. 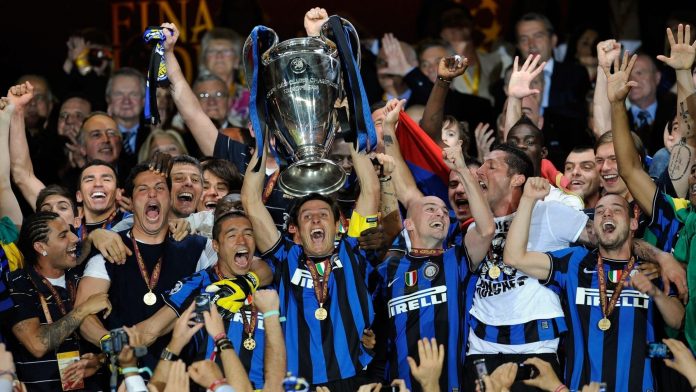 Origin of the Rivalry

An internal conflict occurred 110 years ago between the members that were in the AC Milan board.

AC Milan was established in 1899 by a group of English expats, forming one of the first football clubs in Italy (it was actually named as AC Milan Cricket and Football Club). The club ended Genoa’s consecutive league triumphs and won the league three times in 1901, 1906 and 1907 before Inter’s league triumph in 1910.

However, 9 years on, there was a disagreement amongst its members regarding the signing of foreign players which led to a split, and, subsequently, Internazionale was formed in 1908 and thus, gave birth to one of the biggest rivalries known to the football fraternity.

There are no proper records of the first time the two sides met but, some say it was in Switzerland in the Chiasso Cup final supposedly won by Milan by a 2-1 margin. The first recorded match between the two was in January 1909 in the Prima Categoria, the name Italian Football Championship had back then. The match resulted in a 3-2 victory for Milan.

Earlier Internazionale was seen as the club which represented the bourgeoisie of Milan and thus had the “luxury” of travelling to the San Siro on their cars and motorcycles (hence, the nickname Motoretta or Nerazzurri) and, AC Milan were seen as the club which stood up for the values of the blue-collar workers.

In the 1960s, the Milan derby saw two big stars of Italian football come face-to-face. One of the most representative players of Inter was Sandro Mazzola, the son of former Torino player Valentino Mazzola who, along with most of his Torino teammates, died in the 1949 Superga air disaster after dominating Serie A for four seasons. His Milan counterpart was Gianni Rivera, nicknamed “Golden Boy” for his talent.

This era saw brilliant derby matches and an increasing rivalry: while Milan won the European Cup in 1962–63, Inter followed with back-to-back success in the following years. Milan again won the title in 1968–69. During this successful period for both teams, Milan were coached by Nereo Rocco and Inter by Helenio Herrera, both coaching many notable players.

The rivalry continued on the Italian national team, where two players from their respective clubs would often not play together, with one usually being substituted by the other at half-time. Rivera ended up losing the starting line-up to Mazzola in the 1970 final against Brazil, in which Italy was defeated 1–4 by the South Americans. He would later enter in the 84th minute after Italy were already far behind. We talk about their greatest eras in the section.

No, we are not kidding! These two mammoth clubs ultimately use one ground to play all their home matches. They also play ‘home’ and ‘away’ to each other in the same stadium. So whose stadium exactly is it? 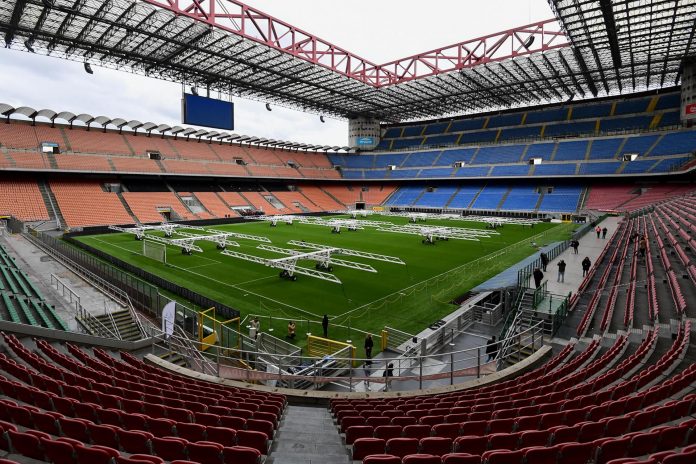 The San Siro stadium did not exist till the year 1926 when the Italian Businessman Piero Pirelli paid for the construction of the ground. AC Milan held sole ownership till 1935 when they sold the stadium to the local council. They continued to be the sole inhabitants of the stadium for a further 12 years when Inter joined them as co-renters of the stadium.

San Siro is actually the name of the district where the stadium is located and thus, it is known as Stadio Giuseppe Meazza since 1980, named after the Iconic Italian and Inter player Guiseppe Meazza. Presently, both AC Milan and Internazionale pay around a turn of 15 million Euros to the local council to rent San Siro. In fact, recently, this unique stadium hosted the Bergamo based Atalanta BC who played all their Uefa Champions League home games there.

These two rivals have played 225 official matches between them where Inter have for the most part been on the winning side on 82 occasions. Milan however, lead the total in number of derby wins at 112 if one factors in the unofficial (71) encounters as well.

They have had similar stories if you compare their histories, with 30 domestic trophies apiece. They both have won 18 league titles, with their last ones coming in 2010 and 2011 respectively, whilst they have a similar success rate in the Coppa Italia, with Inter edging their rivals’ total seven to five. This is reversed in the Suppercoppa Italiana, with Milan winning seven and Inter winning five. But, when it comes to continental glory it is the red half of Milan that has had unparalleled success with 7 European Cups to Inter’s 3. However, the latter has won 3 Uefa Cups in its history whereas, Milan don’t have any.

The AC Milan saw their peak era from the 1980s till the first few years of the 2000s with their last continental success in 2007 when they defeated Liverpool 2-1 in the final in Athens whereas, Inter have seen their success in a sprawled manner with the iconic treble in 2010 under Jose Mourinho.

Since, that very year, these two clubs have rarely challenged for the title and there’s rarely anything being riding on the derbies apart from bragging rights. But, the last season saw one of them (Inter) rising up to the occasion in Europe and, rising up to the fight in their quest to challenge Juventus for the league title but, it all ultimately fell apart.

AC Milan have had a few good years of proper administration and they are garnering some brilliant talents to put among their ranks with Inter also building a robust team with Conte at the helm. 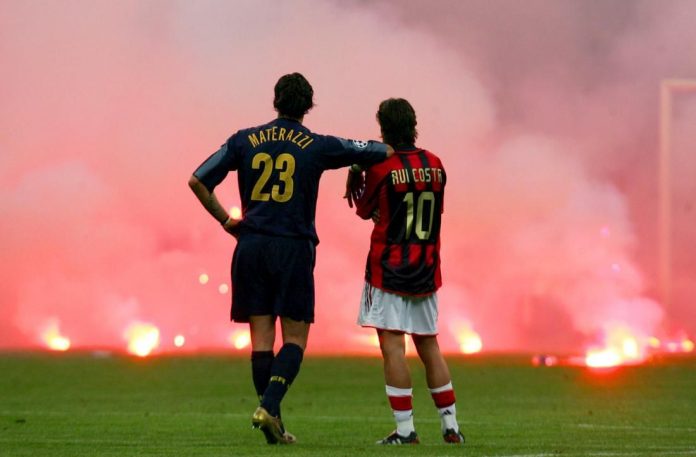 It’s just about time that these two iconic names in Italian football nay, world football turn back the old days and when they do, it will not just be the two Italian giants coming up against each other, it’ll be the two European elites turning up.