On This Day in Football: Hibs beat Real, Keegan resigns as England boss from Wembley toilet 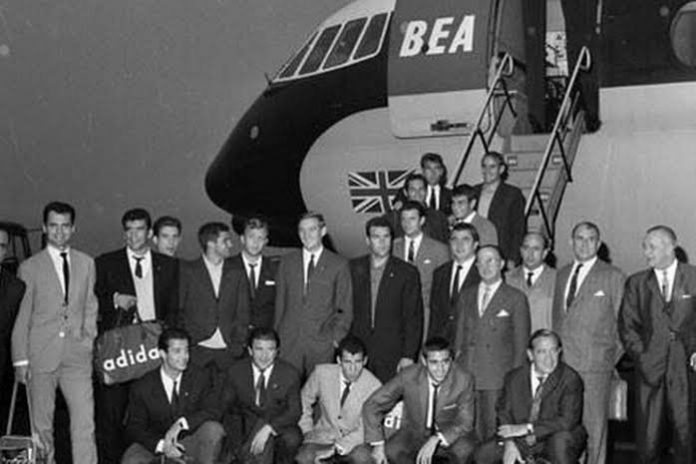 On this day in 1964, Scottish side Hibernian beat Real Madrid 2-0 in a friendly at Easter Road.

The 1964-65 season had begun and Hibernian had lost the Edinburgh derby to Hearts. Manager Jock Stein decided to invite Miguel Muñoz’s world conquering Real side for a friendly game of football to boost morale. Los Blancos were obviously better in almost every department and had the great Ferenc Puskás leading their line.

But it was the mighty Hibs who delivered on the pitch. Peter Cormack, a 19-year-old midfielder, put Stein’s men ahead with a well taken goal before Ignacio Zoco scored an own goal to make it 2-0 to the home side. That own goal was Hibernian’s 200th against foreign opposition.

Pictured above is the Real Madrid squad arriving in Edinburgh.

On this day in 2000, England played their last ever international match at the Old Wembley, losing 1-0 against Germany in a World Cup qualifier.

Dietmar Hamann’s 14th minute strike was enough to secure a memorable victory for the Germans. Immediately after the match, England boss Kevin Keegan decided to quit his job. FA chief David Davies walked into the England dressing room to console the players and the manager. He was greeted by a fuming Tony Adams who urged him to convince Keegan to reconsider his decision. David Beckham was apparently in tears.

With so much chaos inside the dressing room, Davies had to drag Keegan somewhere private where they could have a chat. Davies, genius that he was, took Keegan into a toilet cubicle.

Here is Davies explaining the whole episode in his own words: “Dragging Kevin into a cubicle, I shut the door behind us. We stood there, facing each other. ‘You can’t change my mind,’ Kevin said. ‘I’m out of here. I’m not up to it. I’m going out to the press to tell them I’m not up to it. I can’t motivate the players. I can’t get the extra bit out of these players that I need.’”

So there’s that. The last major incident to take place at the Old Wembley was two men discussing career options inside a toilet cubicle.