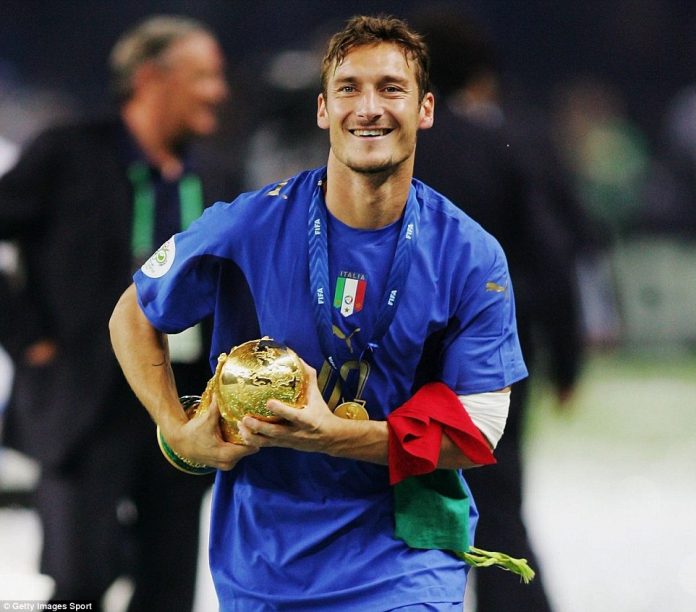 On this day in 1998, Francesco Totti made his debut for the Italian national team in a 2-0 win over Switzerland in a Euro 2000 qualifier.

Born in Rome, Totti spent the entirety of his career at AS Roma, amassing over 750 appearances for the Giallorossi and scoring over 300 goals. The former Roma captain first donned Italy’s iconic Azzurri shirt back in 1992 for the Italy U-15s. The following year, Totti helped the U-16 side reach the final of the UEFA European U-16 Championship in Turkey where Italy lost to Poland in the final.

Totti’s finest hour in the Italian youth teams came in 1996, when he won the UEFA U-21 European Championship under the late great Cesare Maldini.

By 2000, Totti had established himself as one of the best players in Serie A. This resulted in regular international call-ups. His goals guided Italy to the final of the Euro 2000. Despite his man of the match performance in the final, Italy lost 2-1 to France in extra time.

The Italians got their revenge, however, when they beat France in the final of the 2006 FIFA World Cup, earning Totti a winners’ medal.

On this day in 2009, Robert Green became the first England goalkeeper to get red carded in an international match.

Fabio Capello’s men had already booked their place in the 2010 FIFA World Cup and were in Dnipropetrovsk to play Ukraine in a qualifier. Just fourteen minutes into the game, Green committed a professional foul on Artem Milevskiy which resulted in a straight red.

David James replaced Aaron Lennon on the pitch to go in goal. The subsequent penalty by Andriy Shevchenko hit the post and the game remained scoreless. The Ukrainians took the lead shortly afterwards from a Sergiy Nazarenko strike.

England lost the match 1-0 and had already qualified for the World Cup but Green single handedly saved the game from being another drab affair by creating history on his own.