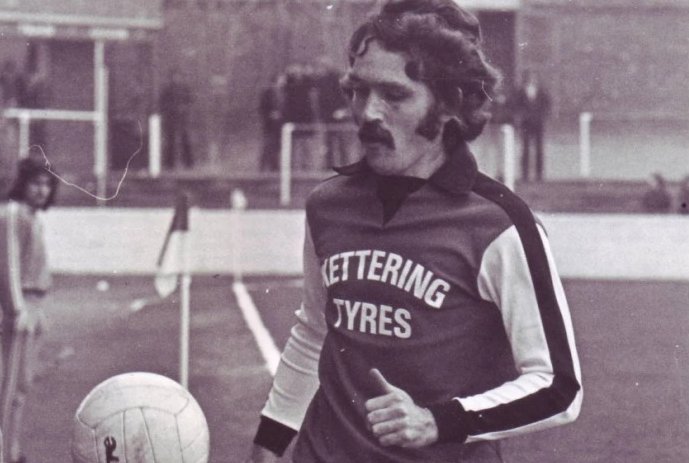 It was made possible by the flamboyant former Northern Ireland international Derek Dougan. The striker, upon retirement in 1975, joined Kettering Town as their new chief executive. One of his foremost accomplishments at the club was to broker a ‘four figure’ shirt sponsorship deal with Kettering Tyres.

So on 24 January 1976, the Poppies became the first club to feature sponsors on their shirts in a Premier Division clash against Bath City. It did not last long, however. Four days later, Football Association ordered the immediate removal of sponsors from shirts. But Dougan did not let this one put to bed as he insisted that the FA’s 1972 ban on sponsorship deals was not put into writing. With the FA resolute in their ruling, the former Aston Villa and Wolverhampton Wanderers forward applied an ingenious idea to carry on their deal with Kettering Tyres. Instead of writing the company’s name in full, the club sported shirts that featured ‘Kettering T’ on the front.

This did not violate the FA’s ruling as ‘Kettering T’ could just mean Kettering Town. Unfortunately the FA were clever enough to see through the deception as they ordered to remove that as well. A potential £1000 fine was too much for a club like Kettering Town to pay so the words were removed, albeit reluctantly.

Meanwhile, continental clubs had no issues regarding shirt sponsorship. Bayern Munich had been sporting sponsors since the early 70s. Eintracht Braunschweig had the Jagermeister logo on their shirt since 1973. Reluctant to let this one go, Kettering Town, along with Bolton Wanderers and Derby county petitioned for the acceptance of sponsorship in English football. The FA finally caved into their demands in 1977.

Ironically, Kettering Town could not find anyone to sponsor them in the following season while Derby landed a deal with Saab Automobiles. Hibernian with Bukta in 1977 and Liverpool with Hitachi in 1979 became the first top flight British clubs to feature company logos on their shirts.