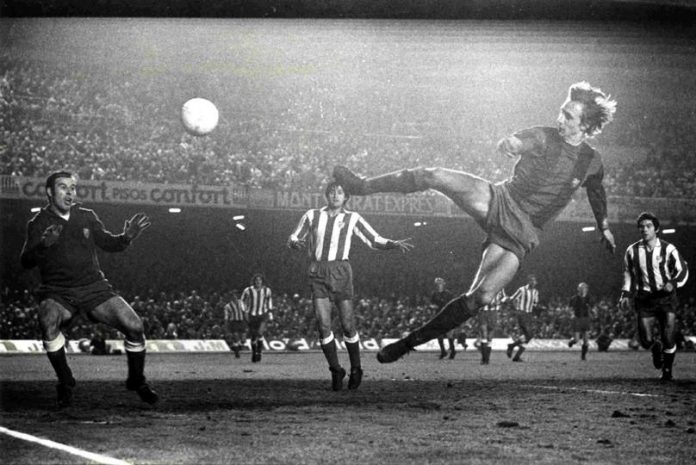 On this day in 1973, Dutch legend Johan Cruyff made his debut for Barcelona and scored twice in a 4-0 win over Granada.

Signed from Eredevisie club Ajax for a world record fee of approximately $2 million, Cruyff had spent the previous nine seasons in Amsterdam winning six league titles and three European Cups. Meanwhile, Barcelona had not won the league title since 1960. Cruyff’s arrival at the Nou Camp sparked a revolution from which the club would benefit for years to come.

By the time Cruyff played his first match for his new club, Barcelona had already played six games of the new season and were languishing near the bottom of the table. But the Netherlands international turned the tables around by scoring 16 goals in 26 appearances and handing Barcelona their first league title in over a decade.

Cruyff would play for the Catalans for five seasons before embarking upon a transatlantic journey to play for the Los Angeles Aztecs. He would later return to Barcelona as a manager and win four league titles and a European Cup.

Terry off the mark

Speaking of debuts by club legends, on this day in 1998, a 17-year-old John Terry made his first appearance for Chelsea as a late substitute in a 4-1 win over Aston Villa in the League Cup.

A product of Chelsea’s youth system, Terry signed professional terms with the club at the start of the season and made six appearances in total in the 1998/99 campaign. He captained the Blues following the arrival of Jose Mourinho in 2004 which ushered in a trophy laden era for the London club.