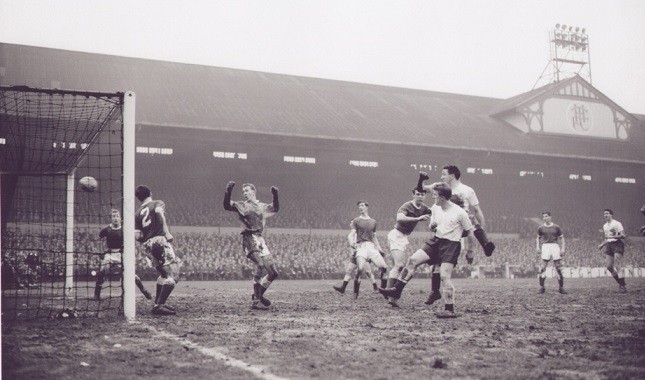 On this day in 1960, Tottenham Hotspur registered their biggest ever win by beating Crewe Alexandra 13-2 in an FA Cup tie at White Hart Lane.

The FA Cup fourth round pitted Spurs, who were sitting at the top of the Division One table, against minnows Crewe, who were languishing at 17th in the Fourth Division. But that didn’t stop the Railway Men from putting up a spirited display in the first leg at Gresty Road on 30 January. Les Allen and Cliff Jones were on the score sheet for Spurs but the match ended in a 2-2 draw forcing a replay at White Hart Lane.

Unfortunately for Crewe, Spurs were at their ruthless best at home and scored ten goals by half time! Bobby Smith opened the scoring in the 3rd minute and would go on to score four goals in total. Les Allen bagged five while Cliff Jones scored a hat-trick that included a penalty. Feeling left out, Tommy Harmer also bagged one for himself.

Tim Coleman had pulled one back for Crewe at 3-1 before Bert Llewellyn added another consolation at 12-2. This still remains Spurs’ biggest victory and Crewe’s heaviest defeat.