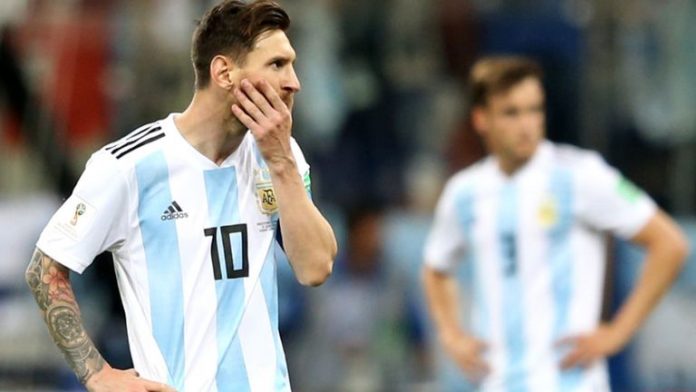 Argentina face Nigeria on June 26 with their World Cup hopes hanging by a thread.

A disastrous 3-0 defeat against Croatia leaves the 2014 finalists on the brink of exiting the competition and anything less than a victory will see them heading home after just three games.

Argentina will also have one eye on the game between Croatia and Iceland, with under-fire coach Jorge Sampaoli praying that the latter don’t spring a surprise against the current Group D leaders.

The last time Argentina failed to progress past the group stages at the World Cup was in 2002 – with their sole victory that year coming against Nigeria.

Argentina are priced at 4/7 to win the game at Bet9JA, with Nigeria on offer at a tasty 9/2 and the draw available at 7/2.

Willy Caballero is set to be dropped by Sampaoli after his horror-show against Croatia, with uncapped River Plate goalkeeper Franco Armani expected to take his place. Angel Di Maria and Ever Banega could be recalled to the starting XI, while Gonzalo Higuain and Paolo Dybala are also available.

Nigeria captain John Obi Mikel will play with his left hand in a cast after sustaining a fracture against Iceland, although he will need to get the all-clear from match officials to wear the protective material.

The two sides faced each other in a friendly back in November, with Arsenal’s Alex Iwobi chipping in with a couple of goals as the Super Eagles won 4-2 in Krasnodar.

However, Argentina have won all four meetings at World Cups between 1994 and 2014.

Nigeria are looking to win successive World Cup games for the first time since 1998 – three points will also guarantee a place in the knockout stages for the fourth time.

Their six World Cup wins have all come against European sides and they have never beaten opposition from another continent.

The only previous time the Super Eagles won back-to-back World Cup games was in 1998, when they defeated Spain and Bulgaria in their first two matches.

Nigeria will undoubtedly head into the game in a relaxed mood, but it is likely to be a different story for Argentina star Lionel Messi.

The 31-year-old has failed to score with his last 22 shots in matches at World Cup finals and he has been disappointing in Russia.

Messi missed a penalty in his side’s 1-1 draw with Iceland, before struggling in the stunning 3-0 defeat to Croatia.

Argentina have been woeful at the World Cup so far and backing a 1-1 draw at odds of 15/2 could pay dividends.