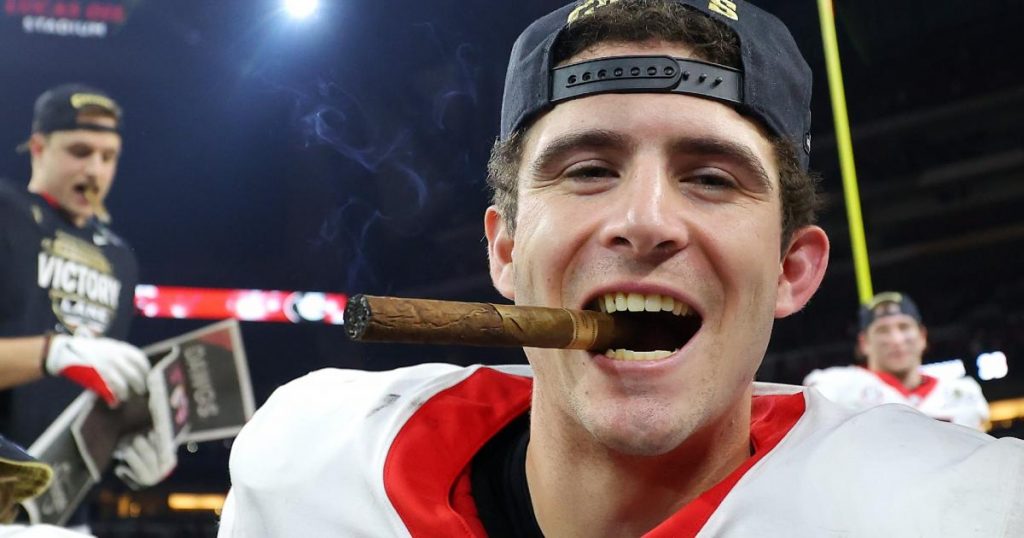 Another week of NCAA football is in the books and the pollsters are back ranking their top teams. This week’s AP poll top-25 has been released and there is a team many think should be included that miss out. Let’s take a look at the week five college football rankings.

Georgia remain atop the AP poll top-25 for week five despite a somewhat unimpressive victory over Kent State. They are closely followed by the usual suspects from the first few weeks of the season – Alabama, Ohio State, Michigan and Clemson.

After Oklahoma’s loss to Kansas State they slip down 12 places allowing other teams to creep up. USC move up a spot to sixth and Kentucky a spot to seventh. Tennessee leapfrogs Arkansas (lost to Texas A&M) and Oklahoma State (big win v some Arkansas Pine-Bluff) into eighth. The OK State Cowboys stay in ninth while North Carolina State rounds out our top ten.

No room for Kansas?

One of our gripes with this top-25 is that there is no room for Kansas, and we are not alone. There were a stream of tweets after the rankings were announced on Sunday asking why they were not included.

I feel awful for Kansas. Not only should they be ranked in the Top 25 but their resume is easily good enough to be in the Top 15!! But unfortunately if you don’t play in the SEC you have to beat twice as many good teams to get half the credit.

Danny Kanell questioned whether they would have been the top-15 if they were in the SEC.

Kansas has beaten West Virginia on the road by 13, Houston on the road by 18 and previously unbeaten Duke by 8. This isn't a charity case. Kansas has legitimately been one of the top 25 teams in the country this season, and it's not that close.

Another CBS Sports writer, Shehan Jeyarajah said that it was not even close and that Kansas were wrongfully denied a place as a top 25 team this week.

Kansas, essentially (given Houston), has three Power Five wins, including two on the road. Fair or not, definitely feels like the “it’s Kansas” factor is why they weren’t ranked, which kind of underscores why the AP Top 25 is meaningless, but I digress. https://t.co/uF5sKGCkVL

Podcast host, Scott Chasen blames the university’s poor college football history as the reason for them being left out.

Whatever the reason, if Kansas keeps winning, they cannot keep being denied a spot as one of the official best 25 teams in the country. Kansas plays Iowa State next up and we are sure that they will finally crack the top-25 should they come away with a victory in that one.