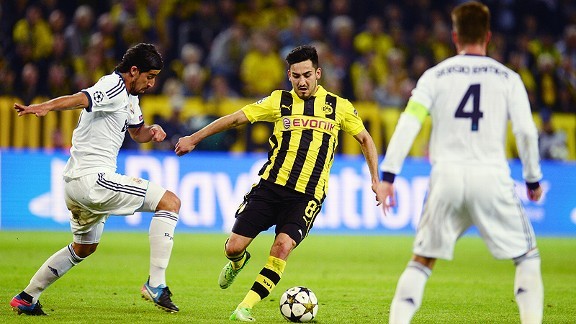 With reported midfield targets Pogba and Vidal linked to new deals at Juventus, Manchester United’s attention appears likely to be shifted to Germany to recruit the quality currently absent in their midfield engine room. With Juan Mata installed from Chelsea during the January transfer window, the first piece is in place. Now Dabvid Moyes needs to add the rest.

It’s been reported that after raiding Borussia Dortmund for Japanese playmaker Shinji Kagawa, United have decisions on a return to the Westphalia club for more reinforcements, but may also be prepared to let Kagawa return to Jurgen Klopp’s club.

The players in the Moyes spotlight are thought to be Ilkay Gundogan and Marco Reus. Whilst prising Reus from the determined clutches of Klopp may be a deal too far, Gundogan could be a different story. The German international, has been out injured for six months with a back injury, but is moving towards the final year of his contract and his father and agent, Irfan, has said his son will be open to offers. United shouldn’t get too optimistic though in thinking that the contract situation gives them the whip hand in any negotiations. When faced with a similar situation over striker Robert Lewandowski, the German club forsook the transfer fee available and retained the player’s services for the final year his contract. That said, offering Kagawa as part on any deal could swing it United’s favour. If they could then secure Gundogan, he would provide the perfect foil for Mata.

United however will also keep tabs on the progress of Toni Kroos at Bayern Munich. The Bayern Munich 24 year old would also offer added quality where United lack it most. Any chances of a deal for Kroos were boosted when it was revealed that despite being an international, the Bayern wage structure pitches himj only as the fifteenth highest paid player, earning less than third of top-ranked Mario Goetze and Franck Ribery’s  £180,000 per week.

Going into the summer, David Moyes will be armed with what has been described as “the biggest transfer budget in Old Trafford history.” It could mean some serious retail therapy for the Scot, and he appears to have his eyes on some German targets. “Vorsprung durch Technik” a they may well be saying at Old Trafford.