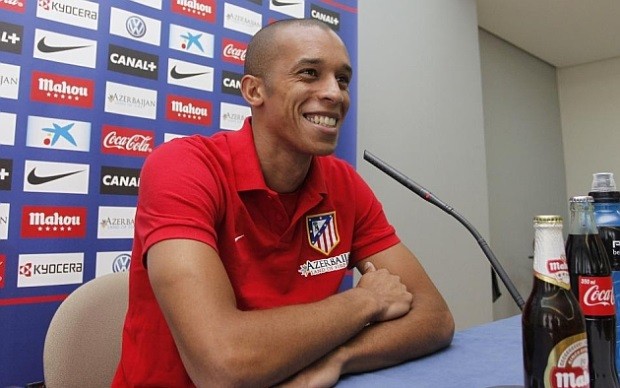 Chelsea maintain a comfortable seven points lead with a game in hand at the top of the Premier League table after earning a 1-0 win over QPR on Sunday.

The Blues are edging closer to reclaiming the league title after five years, thanks in no small part to the roles played by Diego Costa and Thibaut Courtois, two players who were pivotal for Atletico Madrid in winning the La Liga league title in 2013-14.

Costa has scored 20 goals for the Blues while Courtois was outstanding throughout helping Chelsea maintain an enviable defensive record.

Brazilian left back Filipe Luis hasn’t been a massive hit unlike his former Atletico teammates and could leave the club in the summer. Reports in Spain suggest that Chelsea are plotting a move to sign Atletico Madrid centre-back Miranda, as Jose Mourinho wants to bolster his defence in the summer.

The Blues have reportedly sent technical director Michael Emenalo to watch the Brazilian in action during Atletico’s 2-2 draw at Malaga on Saturday.

The 30-year-old has only a year left on his contract, and has caught the attention of Premier League heavyweights like Manchester United and Manchester City.

Miranda wants to stay in Madrid despite being “proud” of the transfer links, but The Mirror claims Atletico could be open to selling the defender.

It seems the interest in the Brazilian is genuine. Miranda is a tough old-school defender, who loves to tackle and make clearances. He is less error prone therefore brings more stability at the back.

These days, however, quality defenders are required to build up an attack (read as a reliable passer) from the back, along with their defensive skills.

Miranda is an exceptional tackler and quite good with his understanding of the game. He tackles on an average 2.2 per game, more than John Terry, Gary Cahill and Kurt Zouma. Terry averages only 1.2 tackles per game, while Cahill (1.1) and Zouma (1.3) more or less have similar stats to show.

It is however no coincidence. At Chelsea, the centre backs do not always need to make enough tackles; the central midfielders do the dirty job for them. Nemanja Matic, playing as a holding midfielder, averages 3.5 tackles per game while Cesc Fabregas, mainly known for his creativity, puts in a massive defensive shift with 2.8 tackles / game.

Furthermore, Cesar Azpilicueta, playing beside Terry at left back provides sufficient defensive cover for his skipper. The Spaniard averages 2.9 tackles per game which shows how well the defensive line up is protected from all around.

Chelsea centre backs therefore are more effective in clearing the ball away. Terry records 5.6 clearances per game while Cahill makes 6.1 clearances on average, compared to 5.2 by Miranda.

The area where Chelsea are so strong is their build up play from the back. Terry has always been a reliable passer throughout his career, and same can be said about Cahill and Zouma. They rely on short passes mostly spreading to the flanks and playing safe to the deep lying midfielders. Terry averages an impressive 90% passing accuracy while Cahill is equally good with his passing at 86.4%.

Miranda is a terrific player, make no mistake, but he is hardly an upgrade on the existing Chelsea defenders. Miranda attempts too many long passes therefore his passing accuracy (75%) gives a pretty average reading.

Stats show Terry is actually getting better with age. The Chelsea skipper has proved that he still has a lot to offer and quite good enough to play at a consistent level. Also, there is no shortage of experience in this squad, in case Chelsea are looking for an experienced defender.

Miranda would be a good signing if Chelsea get him on a cut price deal. He could be an ideal like for like replacement of Terry, should Chelsea decide to use their skipper sparingly next season. On the flip side, he is not a long term solution and Chelsea must look to sign a good ball playing defender instead.

Do you think Miranda would be a good signing for Chelsea? Share your thoughts in the comment section below.