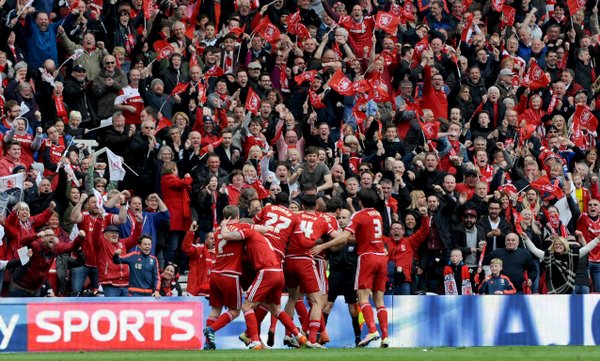 Middlesbrough will be playing in the Premier League for the 2016/17 season after they drew 1-1 against Brighton and Hove Albion at the Riverside.

Cristhian Stuani ended a run of 1013 minutes in all competitions without a goal for Middlesbrough (16 hours & 53 mins) after tapping home for the home side in the 19th minute to set Boro on their way to a decisive point.

Brighton restored parity in the 55th minute when Dale Stephens scored for the visitors. However, within a space of two minutes, Brighton’s hero turned villain after receiving a straight red card from Mike Dean after a challenge on Gaston Ramirez.

With an extra man advantage, Boro saw the game out to secure their promotion to the Premier League on goal difference after seven years stay in the Championship. For Brighton, play-off awaits.

As a result of the promotion to the Premier League, Boro will see an uplift in revenue of at least £170m, according to Deloitte’s Sports Business Group, and should they survive their first season, it could rise to at least £290m.

The financial experts also predict that an increase in revenue for 2016/17 could the Premier League newcomer moving into the world’s top 30 revenue-generating clubs.