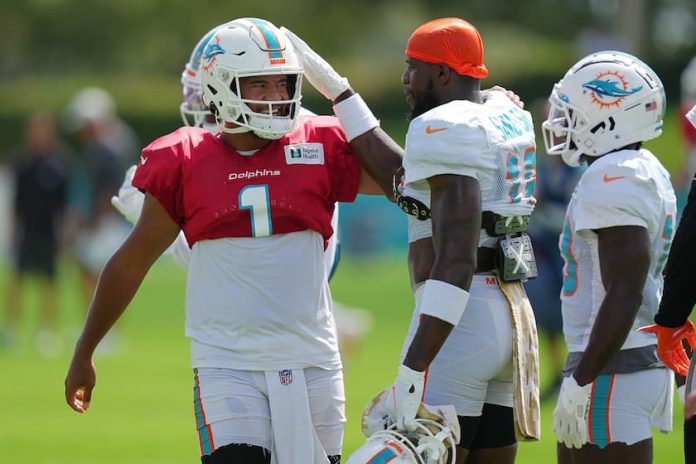 Miami Dolphins have sadly seen their final training session before Thursday night football leaked by a fan who snuck into the stadium.

In a shocking revelation despite strict NFL security measures a fan has gained access to the last Miami Dolphins training session before their game against the Cincinnati Bengals.

The plays which were leaked involved Tyreek Hill and Tua Tagovailoa, who was questionable going into the game tonight. With it being their last training session, it is likely their best plays were on show and the Dolphins will be racking their brains to find a solution.

It is unknown how the fan got access to the stadium, but it is a huge security breach for the NFL after multiple plays were leaked online.

Tua, Tyreek & the Miami Dolphins seen practicing in Nippert Stadium ahead of their matchup with the Bengals. pic.twitter.com/lCgoIiZJde

The NFL don’t take kindly to breaching privacy protocols and in the past have handed out heavy fines to people within the sport, including Bill Belichick. The Patriots were caught filming the New York Jets’ coaches from an angle that wasn’t accepted.

This led to Belichick receiving a $500,000 fine and the team was fined $125,000 as a whole on top of losing their first-round draft pick the year after.

The Dolphins travelled to Cincinnati for the Week 4 opener hoping to continue their 100% winning record however this will be a tougher task now some of their best plays have been leaked.

This leak has added another problem on top of a tough week for the Dolphins who have had injury problems alongside the threat of Hurricane Ian back in Florida.