A Christmas party to remember for a lifetime: that’s what the Man Utd players are preparing to cap a pretty successful 2007 year. According to the Daily Mirror, the EPL Champions have in store something big enough “to make the Wags rock back on their designer heels”… 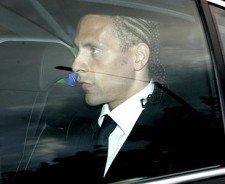 Leading the “organizing committee”, Red Devil center-back Rio Ferdinand is collecting £4,000 from EACH player to organise the lads’ Christmas party and “rounding up 100 ‘gorgeous females’ to keep them company on their drinking, lapdancing and gambling blow out“. The 25 players, who earn tens of thousands a week, seem to have already chipped in a total of £100,000 for the event, and have recruited several trusted girls to hand-pick the beauties to invite to a finale in private surroundings.

Obviously, for those who hadn’t guessed yet: wives and girlfriends are strictly NOT INVITED. Yup, striker Wayne Rooney’s fiancee Coleen McLouglin and the others will be out of sight and can only guess what is going on. Another one barred from attending is Man Utd boss Sir Alex Ferguson, who is believed to have given a reluctant blessing to the knees-up. Indeed, Man Utd do not play again until the following Sunday (when they take on Everton at home) which should give the Red Devils a week to get ready for their next game. Fergie privately warned his boys not to get into any trouble though. Yeah right… booze, gambling, ‘gorgeous females’… what could possibly go wrong?

“The party is for players and invited guests only, strictly no wives, girlfriends or management” said an anonymous United insider. “The lads are employing someone to handpick females to attend. There are strict instructions that only the best-looking girls in Manchester are to be invited“. It also seems that a team of at least 8 security men have been hired, to ensure that guests do not take any mobile phones into the party venue (probably to avoid spicy videos popping up on YouTube the very next day). John Terry is apparently also on the staff list, in case there are any fires to put out.

The festivities will kick off at 12.30pm after the squad finishes training. First stop will be their favourite bar the Living Room, a celebrity haunt in central Manchester. Next is believed to be a trip to the city’s plush new 235 Casino, which they hope to have closed to the public for 3 hours.

After splashing the cash at the roulette and poker tables the players then plan to head to Boutique, a nude lapdancing club worked by beautiful girls. To finish off, the lads will head to an exclusive hotel, the Great John Street (opposite Granada TV) which they have booked it for the entire night from 8pm. The locale has 30 suites, a lounge and cocktail bar, plus a rooftop garden with a hot tub that overlooks the city and the Coronation Street set.