Chelsea head to Old Trafford on Sunday looking to maintain their excellent start to the 2014-15 season that has seen them win seven of their opening eight Premier League games.

Whilst the Blues were in UEFA Champions League action midweek, they only played 24 hours after Manchester United, who drew 2-2 at West Bromwich Albion on Monday night football.

Louis van Gaal’s side have been up and down, and whilst they have only lost one of their last seven in the league, they haven’t faced too many top half candidates, and have looked woeful defensively in just about every game.

Jonny Evans and Paddy McNair missed Monday’s draw at West Brom but may be fit for this game. Both certainly won’t play as right-footed centre-backs – Louis van Gaal has Marcos Rojo as the left-footed left centre-back, and Tyler Blackett can back him up.

Midfielders Antonio Valencia and Jesse Lingard are still sidelined whilst Wayne Rooney serves the final of his three-match ban.

Much of the build up this week has been the fitness of Diego Costa. We reckon it’s all mind games from José Mourinho and that Chelsea’s top scorer will be fit to start this game.

Loïc Rémy is out with a muscle injury picked up midweek. Ramires hasn’t returned yet but should be available for the manager to call upon. 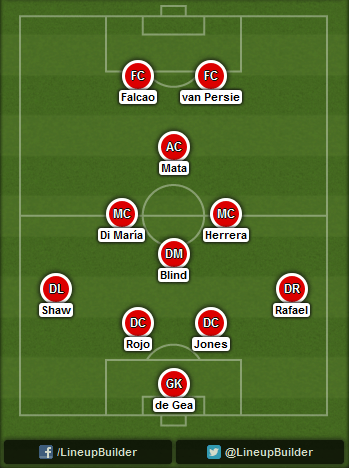 Louis van Gaal may want to consider a more defensive lineup but even then they’ve been playing so poor in defence Manchester United will probably be better off trying to outscore the league leaders. Radamel will be well-rested and fit to start this one should the Dutch manager go with two strikers up front. 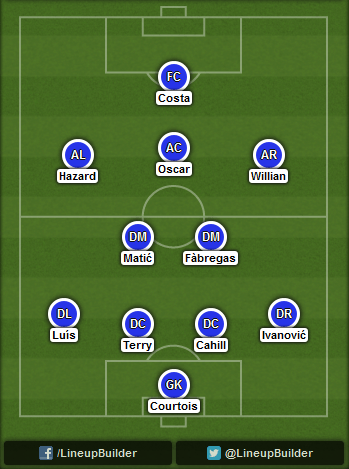 Filipe Luís will make his first Premier League start in place of the suspended César Azpilicueta at left-back. The right wing is the only position Mourinho is likely to change from this lineup with André Schürrle available to start there. Anyone think Didier Drogba will start ahead of Diego Costa?

Cesc Fàbregas vs Daley Blind
Stéphane Sessègnon was too much for Daley Blind to handle last time out. If that’s anything to go by, the Dutch international is really going to struggle against the Premier League’s number one playmaker. Cesc Fàbregas has seven assists in his first eight Premier League games and with the goals United have been conceding Chelsea fans have every reason to be confident he’ll be setting up more this weekend.

Willian & Branislav Ivanović vs Luke Shaw
The young Manchester United left-back has not looked too solid in his opening couple of matches and the team have yet to keep a clean sheet with him in the side. Luke Shaw also carelessly conceded a penalty versus Everton. Willian is a hardworking midfielder down the right who creates a few chances and gets the odd shot in on goal himself. Supporting him is Branislav Ivanović who has bombed on from right-back this season. If Shaw doesn’t get support from Ángel Di María defending Chelsea will double up on the England international. Ivanović has chipped in with a couple of goals this season and got in the box to create chances too. Defensively, Willian will get back to help prevent Di María from having much of an impact on the game. Expect Mourinho to have singled him out as the biggest threat and prevent him from getting lots of time and space.

Prediction: Manchester United 1-3 Chelsea
José Mourinho will not come to Old Trafford to play for a 0-0 draw like he did last season. He’ll know Manchester United are for the taking and he will take advantage of them. Whether it’s from set plays, counter attack or pressure – Chelsea will break down this fragile defence, and more-than-likely do so on more than one occasion. We feel we’ll being conservative with this prediction and we’re being generous to give Manchester United a goal. Admittedly, they do have a great attacking unit.