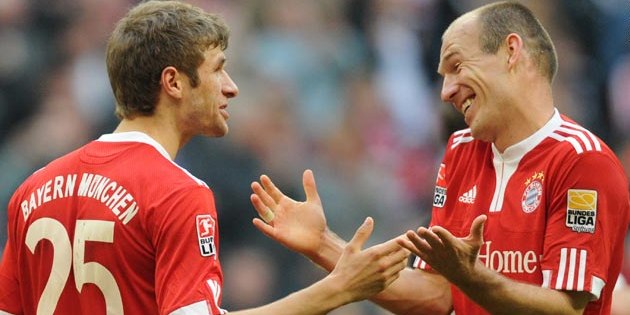 Manchester United’s expected overhaul this summer may not be as easy to kick-start as once thought, with both Thomas Muller and Arjen Robben reportedly joining the list of stars to reject the overtures of the struggling champions.

German attacker Muller, who has been in and out of the Bayern first team this season under Pep Guardiola, has been linked with a move to Old Trafford this week, with Bayern top dog Karl-Heinz Rummenigge poignantly wading in to the debate just yesterday.

But self-professed transfer guru Jan Aage Fjortoft, the man who first broke the Mesut Ozil transfer to Arsenal, has today revealed on Twitter that the German has no intention of leaving Bayern, and the same can be said of his teammate Arjen Robben.

Thomas Müller has denied rumours that he is leaving Bayern. There is a surprise for you…. Coming up soon: Robben says the same

“Normally I say that your players who want to get away, to let go. But for Thomas, Bayern must fight. We have to convince him if he really plans to leave. Only if he makes it very clear that he wants to leave, should be given over to let him go.”

“He is a player from Bavaria and the fans identify with him. I do not see why he should be unhappy.”

Arjen Robben, who has been at the Allainz Arena since 2009, has been sporadically linked with a move away, with Manchester United said to be keen on bringing the 30-year-old back to the Premier League, where he spent three highly prosperous years at Chelsea from 2004-07.

Interestingly, Robben and Muller came to blows three years ago during a 3-1 win over Werder Bremen, with the Dutchman accusing his teammate of being disrespectful by complaining about his passing.

Who was in charge of Bayern at the time? Louis van Gaal, who is expected to take the reigns at Old Trafford in the summer! 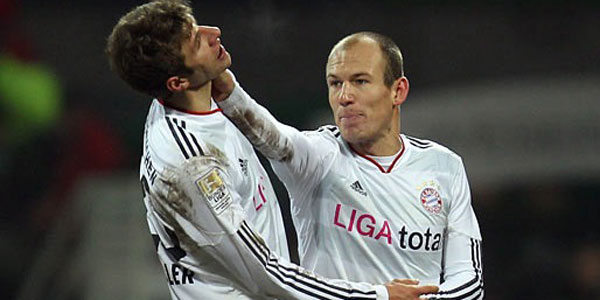 But both Robben and Muller are now seemingly happy in each other’s company in the German capital, and with their teammate Toni Kroos no closer to joining the Red Devils as he was in January, Freiburg defender Matthias Ginter said to be joining Borussia Dortmund, and Paul Pogba ripping into the Red Devils earlier this month, Manchester United’s summer revamp may not be so straightforward.

What do you think? Who would be a better fit at Old Trafford, Muller or Robben? Should United try and persuade the duo to make the move?