Arda Turan is a self-confessed Liverpool fan. The 27-year-old Turkish midfielder was linked with a move to Liverpool, during his days at Gala. Rafael Benitez was thought to be one of his key admirers, while the player himself confessed his dream to play in front of Anfield crowd in future. Alas, the deal never materialised and though he was sporadically linked with Liverpool but the interest was never that genuine. 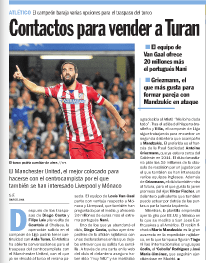 He went on to join Atletico Madrid and became one of their key players. He played a major role (3 goals; 4 assists) for the Rojiblancos last season helping them to win the league title. However, like several other Atletico players moving elsewhere for greener pastures, his time could be up at Atletico as well.

According to Catalan newspaper Sport, Liverpool and French club Monaco had shown an interest in him, but it is Manchester United, who are ready to make a formal offer for the attacking midfielder.

The report claim, Manchester United are ready to pay €20m for him, while could include Nani as a part of the deal. Atletico are also showing a keen interest in Javier Hernandez, therefore any potential deal involving the Mexican cannot be ruled out either.

Atletico are plotting a move to sign Real Sociedad’s highly talented winger Antoine Griezmann, who could be a perfect replacement of Turan, should he leave the club.

While the lure of joining a gigantic club like Manchester United could too tempting, but will Turan join a club that are not in the Champions League. Although United have an avalanche of attacking midfielders, but a deal for Turan cannot be completely ruled out either, especially if United manage to sell the likes of Nani and Ashley Young.