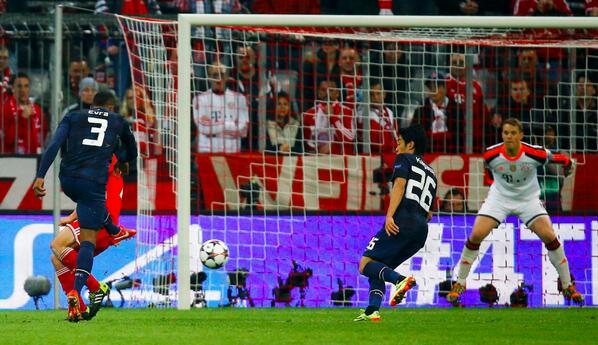 Bayern Munich bore the look of a sleeping bear, waiting to be poked. They had been unusually flat but characteristically superior in possession, but after Evra’s stunning effort, beating Manuel Neuer with a flying strike, Bayern immediately upgraded.

United would have gratefully received Jose Mourinho’s wisdom from yesterday evening. The United coaching staff and substitutes celebrated the incredible strike on the touchline, leaping from the dugout in utter joy. Bayern awoke 22 seconds later, through Mario Mandzukic before Thomas Müller and the outstanding Arjen Robben put the tie to bed. United were ultimately eliminated and outclassed. Bayern deserved progression.

Here are the player ratings from the Allianz Arena:

Spaniard was helpless for all three goals but was generally a commanding force in the Unjted goalmouth, collecting crosses and corner deliveries well under pressure.

The England defender neutralized the threat posed by Ballon d’Or finalist Franck Ribery sufficiently. A disciplined performance before the observant eyes of the attending Roy Hodgson.

Selected by Moyes for his “greater athleticism”, Smalling enhanced his World Cup chances with a solid display. Disciplined up against Mandzukic and looked much more comfortable at centre-half than at right-back.

This was vintage Vidic, putting his body on the line for the cause. His Serb-Croatian duel with Mandzukic, a sequel to hostility in the first-leg at Old Trafford, was an interesting sub-plot.

The Frenchman scored a sensational strike but the adrenaline of the goal got to him, with the full-back caught out for Mandzukic’s equaliser and culpable for Bayern’s second and third goals.

Ecaudorian was an energetic option on the right flank, marauding up and down the side, but his distribution in the final third was unimpressive.

The Scotsman now seems to have fully recovered from his health issues and return to top form, breaking up developing passages of Bayern play shimmering with danger. How he was overlooked for the oblivious Maraoune Fellaini in the first-leg remains bewildering.

Carrick was once again disappointing on the big European stage, out-played substantially by Toni Kroos and Mario Gotze. Lacks the quick feet to flourish at this high level.

In a rich vein of form, the Japanese midfielder was a rare selection of faith and did not disappoint, picking up smart positions and finding pockets of space. Was at times caught out by the lethal Arjen Robben when carrying out his defensive duties.

The United forward was jeered throughout by the Bavarian support but each public show of derision seemed to lift him. However, he was uncharacteristically hesistant in-front of goal, spurning a fabulous opportunity created by great work by Welbeck. Rooney ran himself into the ground.