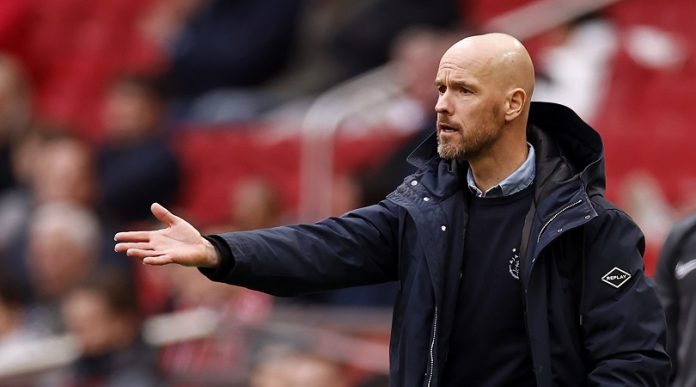 Manchester United are reportedly set to announce the arrival of Erik Ten Hag as their new manager.

The Red Devils have apparently reached an agreement with the 52-year-old Dutchman but they are still in talks with Ajax regarding his release clause.

As per the Mirror, Ten Hag is all set to sign a four-year contract with the Premier League giants and he will replace interim manager Ralf Rangnick, who is set to move on to a consultancy role.

Apparently, the Premier League giants will have to pay a fee of around €2 million in compensation for the Ajax manager.

Meanwhile, Ten Hag is keen on appointing Mitchell van der Gaag as his assistant and Manchester United are currently in talks to lure him to Old Trafford next season.

The Red Devils have had a disappointing season so far and it will be interesting to see whether the arrival of Ten Hag can revitalise the club and help them return to their former glories.

When Manchester United signed the likes of Raphael Varane, Jadon Sancho and Cristiano Ronaldo at the start of the season, few would have expected them to struggle to finish in the top four.

However, the reality is that Manchester United might miss out on Champions League football next season.

Ten Hag has done an exceptional job at Ajax so far and his attacking philosophy is likely to excite the Old Trafford faithful.

Furthermore, the Ajax manager is outstanding when it comes to nurturing young players and the likes of Sancho, Elanga, Rashford and Diallo could all benefit from his arrival next season.

Meanwhile, FC Utrecht captain Willem Janssen has warned the Manchester United players that the Dutchman is a demanding manager and the players will have to raise their performance levels and professionalism if they want to work with him.

Janssen played under the Ajax manager for two and a half years and he believes that the Dutchman is a very complete manager who is highly professional and has a keen eye for detail.

“He’s very professional, he’s highly demanding. He demands everything from a player. He creates a winning environment, every detail is key,” Janssen explained. “When he came to Utrecht, the mentality changed. It needed some time, three or four months, before the mentality of all the club and the players changed a lot because of him.

“He taught us to be more professional, more active, more concerned about your own development and the team’s development. In a way, he was a very complete manager. Also, he expressed his ideas about his football clearly for us as players and it was a very high level. After his arrival, the results improved, we finished fifth, fourth and fifth. For the club, it was a very successful period.”