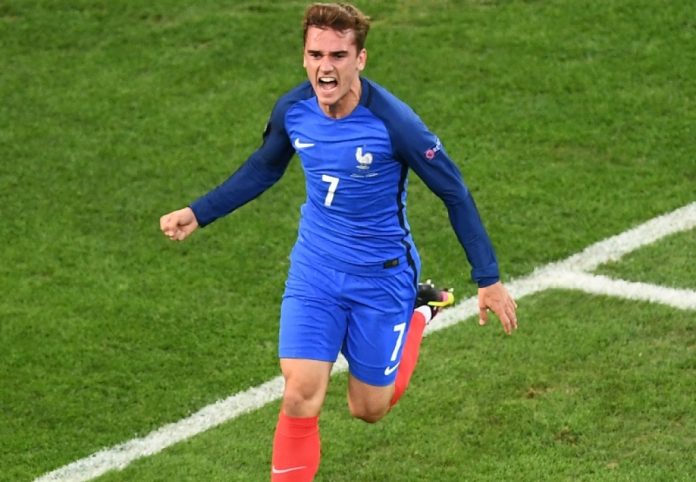 Antoine Griezmann has turned into a worldwide superstar over the past year. He led France’s charge in Euro 2016 by scoring six goals; three more than any other player in the tournament. The Frenchman also led Atlético Madrid’s attack, propelling them to yet another Champions League final. Despite losing both finals in 2016, Griezmann was recently voted into the UEFA Team of the Year.

Griezmann, 25, has become one of Manchester United’s prime transfer targets this window. Mourinho hopes to bolster his attack by adding yet another star to the team alongside recent signings Paul Pogba and Zlatan Ibrahimovic.

According to SunSport, Manchester United have discussed personal terms with the Atletico star’s representatives and are prepared to offer £220,000 per week in wages, which is the same as Paul Pogba is currently earning. This salary would see Griezmann make over £11 million per year just in wages and he would become the joint top earner at Old Trafford. The two French teammates could soon be playing for the same club. Atlético Madrid have reportedly set an £86 million release clause on Griezmann, and are insistent that The Red Devils pay full price to let the young Frenchman leave the club. This would make Griezmann the second most expensive transfer in history, only a few million euros behind Paul Pogba’s move to United.

If Griezmann does sign for Manchester United it will be interesting to see how Mourinho changes his side to accommodate him. Griezmann may play up front with Ibrahimovic or perhaps on the wing. United’s dynamic attack will certainly benefit if they can reach an agreement with Atlético Madrid. And of course Griezmann himself would have to agree to switch loyalties. Realistically, if Griezmann is playing for big trophies he may be better off at Atlético Madrid as they have qualified for two of the last three Champions League finals. However, the money and future of United could tempt Griezmann to join The Red Devils.

The thought of Manchester United’s potential team is incredibly threatening and they could potentially be climbing towards a spot in the Champions League, especially with Griezmann in Mourinho’s side.