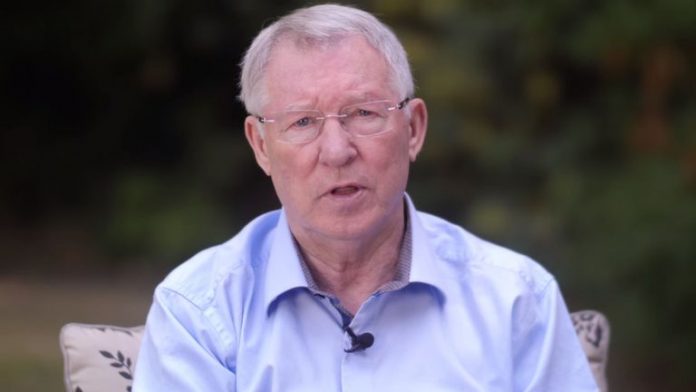 Unless you’ve been living under a rock you’ll have seen the video of former Manchester United manager Sir Alex Ferguson speaking for the first time since recovering from a brain haemorrhage.

Sir Alex was rushed to hospital on May 5, but he has fortunately made a full recovery and says he will be back at Old Trafford later in the season.

“First of all to thank the medical staff at Macclesfield, Salford Royal and Alexandra Hospitals,” he said.

“Believe me, without those people who gave me such great care, I would not be sitting here today. So, thank you from me and my family, thank you very much.

“It has made me feel so humble, as all the messages that I have had from around the world, wishing me the best and the good wishes, do resonate very strongly with me.

“So, thank you for that support that you have given me.

“Lastly, I will be back later in the season to watch the team. In the meantime, all the best to Jose (Mourinho) and the players. Thank you very much.”

You’d have to have a heart of stone not to have been pleased to have seen Sir Alex looking well and clearly looking forward to watching his beloved United in action next season. Or you could be a moron.

Yes folks. There were actually some idiots who thought the video was an opportunity to engage in what passes as “banter” these days.

Brain haemorrhage? Let’s wish death on the bloke. Won loads of trophies for United? Let’s be so totally blinkered that we all can’t be decent human beings and wish him well.

If you were one of the simpletons who thought it was acceptable to spew bile in response to Sir Alex’s message, it really is time for you to close your social media accounts and go and get some help.

Aberdeen and Burnley played out a 1-1 draw in their Europa League preliminary round tie on Thursday. Typically of Scotland vs England games there were plenty of people eager to have their say on proceedings.

Let’s start with Chris Sutton. Ill-formed? What’s that then?

“Ill-formed, disrespectful and lazy”@Chris_Sutton73 dismisses claims “Scottish football is in decline” as “garbage”.

Aberdeen held their own against Burnley #ABEBUR

Do people “down South” need to show the Scottish leagues more respect?

This guy’s channelling his inner Keegan.

You do know there’s a second leg?

#Aberdeen showing money isn’t everything when it comes to football. Players should be proud of that result against #Burnley tonight. Just goes to show the English Premier League is once again overrated. #Dons pic.twitter.com/kHTVu8Lr9y

After watching the Burnley v Aberdeen match and i’d say Burnley would be doing well to get a top six place in the Scottish Championship. #AberdeenVBurnley

What a fairy tale for little Burnley getting a 1-1 draw against Aberdeen. When they entered the Europa League all they had was a dream, and 120 million pounds.

Not just everyone in Scotland, Mickey. All of Blackburn too.

It would appear Aberdeen have given those down south a little reality check. Apparently Rooney going to Salford meant they were a pub team. The team from the most overhyped league in the world maybe underestimated tonight? Think everyone in Scotland will be cheering the Dons on.

Blackburn Rovers 3-0 Everton. Pre-season or not, given that Tony Mowbray’s side are in serious need of additions up front this has to be a very worrying result for Toffees’ fans everywhere. Still think sacking Allardyce was a good idea?