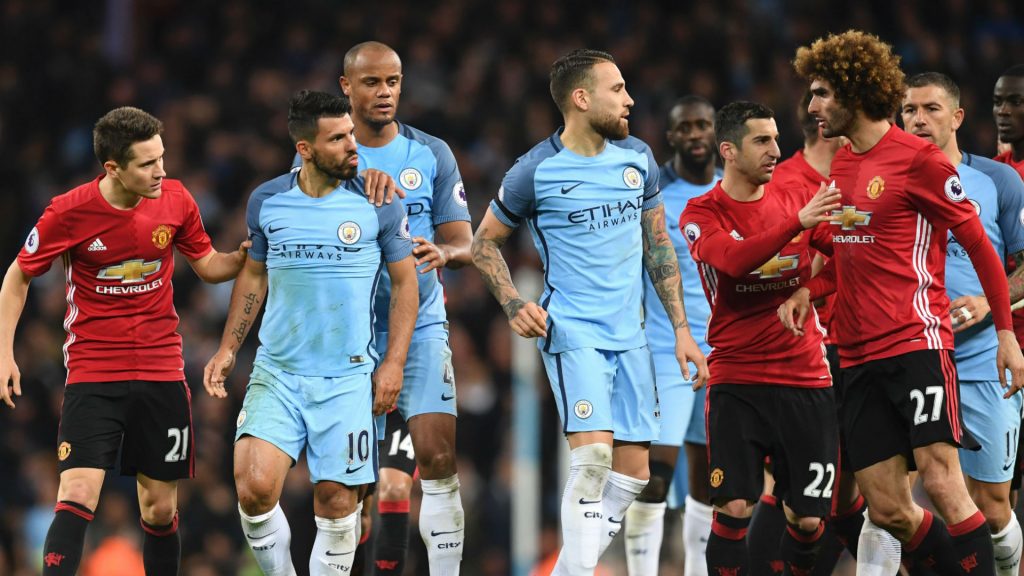 So ahead of the highly anticipated clash between the two city rivals, we take a look at five classic Manchester Derbies played at Old Trafford in the Premier League era.

It may seem a lifetime ago but the City squad once featured the likes of Benjani Mwaruwari and Sun Jihai instead of Sergio Aguero and Kevin de Bruyne. Led by Sven-Goran Eriksson, a not so stellar City XI arrived at Old Trafford to play the title chasing United.

Sir Alex Ferguson’s boys wore special commemorative shirts to mark the 50th anniversary of the Munich Air Disaster. Darius Vassell and Benjani scored for City before Michael Carrick added a late consolation for the hosts as United succumbed to their first home defeat in the league that season.

Andrei Kanchelskis produced one of the finest individual performances in the history of the Manchester Derby as the Red Devils hammered City 5-0. Operating on the flanks, Kanchelskis scored a hat-trick and ended up being United’s top scorer in the Premier League that season.

“I will never forget that match,” he later reflected. “Eric Cantona opened the scoring and I got my first goal just before half-time. I scored again just after the break and managed to complete my hat-trick just before the end.

“Mark Hughes also got a goal. I remember that Paul Ince and Cantona played really well and it was a superb occasion for the fans. It was a great game to play in.”

This clash provided the greatest goal ever scored in a Manchester Derby. Nani’s opener for United was cancelled out by a deflected David Silva strike. But it was Wayne Rooney who produced a sublime piece of skill that will forever be etched in the memories of United fans.

Nani sent in a deflected cross from the right flank. Rooney, lurking inside the d-box, had to readjust his position before smashing the ball past Joe Hart with a superb bicycle kick.

A dark day at Old Trafford as City smashed United 6-1 to hand Sir Alex his worst ever loss.

Mario Balotelli had been on the news for setting off firecrackers inside his house but the Italian opened the scoring in the 22nd minute before celebrating it by brandishing a t-shirt that read “Why Always Me?”.

Sergio Aguero, Edin Dzeko and David Silva also got on the score sheet to register one of the most remarkable results in the history of Old Trafford.

Former United striker Carlos Tevez had jumped ships to the blue half of Manchester in the summer that saw City spend over a £100 million on new recruits.

This was the first of four meetings between the two sides that season and perhaps the greatest Manchester Derby of all time. City equalised not once but thrice in the game only to see United snatch a (very) late victory.

Wayne Rooney opened the scoring only for Gareth Barry to equalise shortly after. A Darren Fletcher goal was cancelled out by a Craig Bellamy strike. The Scotsman put United ahead again but Bellamy scored his second of the game to bring the scores down to 3-3.

But with six added minutes and ‘Fergie time’ in full flow, Ryan Giggs found Michael Owen free in the box and the former England international produced a clinical finish to win the game for United.