The two favourites for the Premier League title meet in a heavyweight clash at the Etihad Stadium on Sunday.

Chelsea have become the odds-on favourite to win the 2014-15 title following their start to the season that has seen José Mourinho’s side take maximum points and score 15 goals in only four games.

The Blues are coming off the back of a surprising and disappointing 1-1 draw at home to Schalke 04 in the UEFA Champions League on Wednesday. The West London side had been heavily favoured to thrash the German opposition.

On Wednesday Manchester City were handed a heartbreaking last minute loss to Bayern Munich at the Allianz Arena thanks to centre-back and former City defender Jérôme Boateng finding the net with a sweetly struck effort just inside the penalty area.

As a result Manchester City are now winless in their last three matches – losing 1-0 at home to Stoke City and drawing 2-2 at Arsenal in their two prior Premier League matches.

Stevan Jovetić could be fit to face Chelsea but Fernando remains sidelined. Everyone else is available to manager Manuel Pellegrini.

José Mourinho has a full squad of players available to him. Diego Costa started on the bench midweek so is relatively fresh. 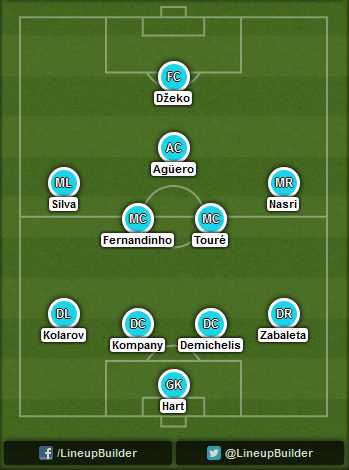 Pablo Zabaleta should return to right-back after being suspended midweek. With Fernando injured Manuel Pellegrini has no option but to go with Yaya Touré. The Ivorian has looked terrible to start this season and disinterested. Is he really upset at the club for not celebrating his birthday over the summer, or not recovered from the World Cup and a family tragedy? One thing’s for sure, he’s not himself. Sergio Agüero was rested for this game by starting on the bench in Germany. James Milner is an option in midfield and could challenge both Samir Nasri and Jesús Navas on the right side of midfield. After all, Zabaleta will need some help stopping Eden Hazard down that side. 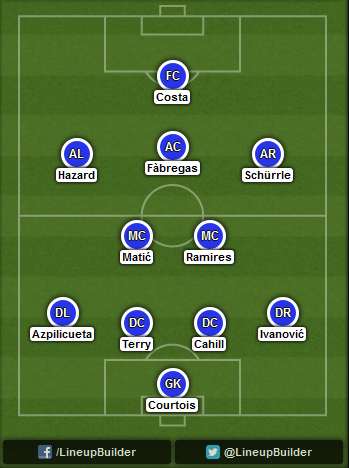 A victory for José Mourinho’s side on Sunday would send a massive statement but the Portuguese manager will surely play it cautious against last season’s top scorers by playing two holding midfielders. Therefore Cesc Fàbregas and Oscar will not both start. A draw works fine for the Blues keeping a distance of five points between themselves and Manchester City with only Aston Villa have a minor miracle in being able to overtake Chelsea over the weekend. André Schürrle offers pace and a threat down the right wing. Perhaps Branislav Ivanović won’t bomb on so much from full-back either in this match.

Diego Costa vs Vincent Kompany
An exciting prospect sees Diego Costa against Vincent Kompany. That’s a striker with an astonishing seven goals in four games versus one of the best centre-backs in the world. Look for the Spanish international to try find some space. At worst, his movement will draw defenders out of positions to potentially free up some teammates. He is supported by a fantastic creative midfield.

Cesc Fàbregas vs Fernandinho
If Yaya Touré isn’t himself Fernandinho will need to step up to the plate to slow down the production of Cesc Fàbregas. The playmaker has created at least one goal in each of his four Premier League games for Chelsea. He also opened the scoring midweek against Schalke. He’s working in sync with Eden Hazard and Diego Costa with the trio tearing open defences to start the season.

Sergio Agüero vs John Terry
Manchester City’s biggest attacking threat is their Argentine striker. Sergio Agüero hasn’t had much luck with fitness to start the season but after only being used as a late substitute midweek you have to believe he was rested for this match. When he’s fit he rips open most defences. Look for Chelsea to keep a man tight on the goalscorer and even foul him quick and frequently when he receives the ball if he’s looking sharp.

Prediction: Manchester City 1-2 Chelsea
Chelsea are in flying form and Manchester City are winless in three. That said, I don’t expect José Mourinho to send his team all out blazing from the start but they have the quality and form to pick up the three points after 90 minutes. Defeat would be a massive blow for Manchester City but their manager failed to sure up the gaps in their defence that Bayern Munich were exploiting midweek. Mourinho is capable of setting his team up to exploit the opposition’s weaknesses.  Chelsea won both meetings last season.