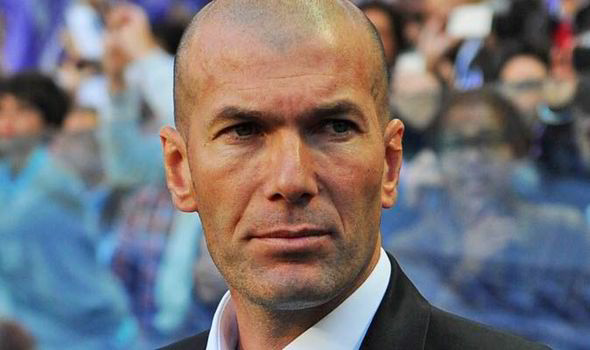 Spanish giants Real Madrid and Atletico Madrid have been prevented from buying players until the summer of 2017.

The transfer ban has been imposed on the Madrid clubs by football’s governing body FIFA as punishment for contravening the rules relating to signing players under the age of 18.

The ban comes into effect from the next transfer window – i.e. summer 2016.

The transfer embargo leaves Real Madrid with bigger problems than their derby rivals.

Atletico boast a deep squad and have a talented group of young players, who are expected to form the spine of the team for years to come.

In Jan Oblak (23), Atleti have one of the best young goalkeepers in the world at present.

Furthermore, they have bolstered their midfield by signing Augusto Fernandez from Celta Vigo and Matias Kranevitter from River Plate this month.

The Rojiblancos also boast a rich pool of talent in the forward department as well.

Angel Correa (20), Luciano Vietto and Yannick Carrasco (both 22) are already regular members in the side.

Simply put, Atletico have the necessary resource from within to continue a season without making any new additions.

All they need is to keep hold of their star players like Koke or Antoine Griezmann, who are attracting interests from heavyweight Premier League clubs.

The same cannot be said about Real Madrid, who follow a different business model.

Transfer window to them is like water to a fish, and key to how the club is run.

It will be really interesting to see how they go through a season without being involved in transfer activities.

Zinedine Zidane can only able to promote from within, but what options does he have?

Marco Asensio and Jesus Vallejo (both 19) have impressed in their loan spells with Espanyol and Real Zaragoza.

Likewise, Odegaard is a highly rated youngster but he hasn’t done well since moving to Real Madrid last summer.

Madrid are likely to appeal against the sanction, which can delay it’s implementation.

Barcelona successfully did this in 2014, and Madrid can follow the same trail.

So, what’s the bottom line?

The ban is likely to send the transfer market into turmoil.

For instance, it ends all hope for Manchester United to sign one of Cristiano Ronaldo or Gareth Bale from Real Madrid.

Bale has reportedly grown unsettled at Madrid, following the departure of Rafael Benitez.

The Welsh winger insisted last week that he was happy to remain, but United had been encouraged that a deal may be possible.

Likewise, there has been a lot of speculation on Ronaldo’s future in recent weeks.

The uneasy relationship between Ronaldo’s agent, Jorge Mendes and Real president, Florentino Perez, has given rise to suspicions that the 30-year-old could be sold.

United were hoping to bring him back to Old Trafford next summer, but it seems, any move for the Portuguese is now highly unlikely.

The Argentine have stated his loyalty for Atletico time and again, and may well reject the idea of leaving the club at this crucial period.

How the ban can spark a transfer scramble

The Spaniard signed a long-term contract at United after seeing his move to Madrid broke down at the last minute last summer.

United probably were expecting a bid from Madrid next summer, but the Old Trafford camp can now relax for another year.

Zidane is reportedly a big fan of the Chelsea winger.

The Belgium international has emerged as the most likely replacement for either Ronaldo or Bale, should they leave.

If the ban is upheld, PSG likely to emerge as firm favourites for his signature in the summer.

The Polish international is believed to be contemplating leaving Germany next summer.

Madrid had identified him as a potential replacement (and an upgrade) for Karim Benzema. Now they are out of the race, United may fancy their chances.

The France midfielder is expected to leave Italy next summer.

The chances of him being the next Galactico is off the rank. Instead, Barcelona now emerge as strong favourites to sign him.

Benitez had recommended Stones to Real’s hierarchy as per The Times during his spell at the club.

Madrid still retain an interest, but he will probably move to another Premier League club next summer.