Luciano Civelli – Does His Face Fit at Portman Road Anymore? 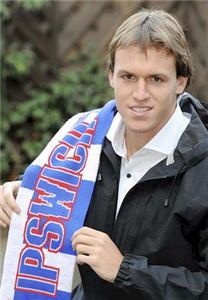 Ipswich Town’s forgotten man Luciano Civelli has declared to the regional press in recent weeks that his knee feels “perfect” after his 18-month injury nightmare that has seen the Argentine wide man play just eight times for the Tractor Boys since a £1 million switch from Banfield in the 2009 January transfer window. So why aren’t Blues supporters seeing the leggy left winger in action for the first team?

Rumours have circulated over the last 24-hours suggesting that Civelli’s relationship with Town supremo Roy Keane is increasingly icy. Keane spoke to the press regarding the return of Civelli back in September, when he revealed that the 24-year-old now had to overcome the mental barriers of recovering from such a serious injury (cruciate and anterior knee ligament damage).

Keane had to battle through similar psychological issues himself after suffering a similar injury during his time at Manchester United, so it is puzzling that the Irishman appears incapable of having patience with Civelli’s recovery.

It may well be that Civelli’s face simply doesn’t fit at Portman Road anymore. After all, he was one of the last big-money signings made by former manager Jim Magilton, and Keane may be making a conscious, if self-indulgent, decision to sever all ties with the previous regime.

The lack of reserve games for Ipswich’s second string has proved a problem, not just for Civelli, with the club frantically trying to tie up some friendlies with top flight opposition. The aim would be to give the likes of Civelli, and the fit-again Alan Quinn the chance to put themselves in contention for a first team return in the English Championship.

I was encouraged by Civelli’s style and the balance he brought to the team in that short spell – his Man of the Match display at Reading the main highlight. But with Tottenham loanee Andros Townsend likely to remain ahead of him in the first team pecking order, don’t be surprised if we see our forgotten man trudge back across the Atlantic come January, in a bid to rebuild his career in South America.