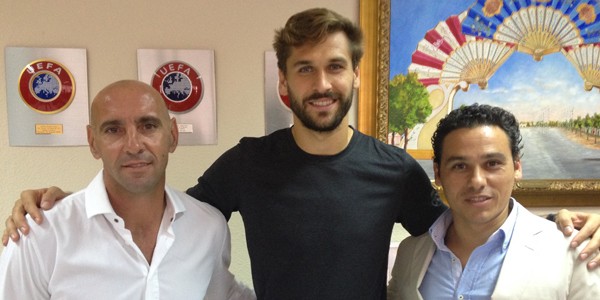 The 30-year-old’s move was officially confirmed by both Sevilla and Juventus and he will be officially presented as a Sevilla player tomorrow afternoon.

Llorente moves to Seville on a free transfer after his contract with Juventus was terminated by mutual consent, and will wear the number 24 shirt at his new club.

The striker played 92 times for the Bianconeri since joining in the summer of 2013, netting 27 goals and helping the Turin giants win two Serie A titles and their first Coppa Italia in 20 years.

Llorente, who came up through the ranks at Sevilla’s domestic rivals Athletic Bilbao, had a prolific time with the Basque club, scoring 111 goals in over 300 appearances.

Sevilla have brought in two strikers, Ciro Immobile and Llorente, to fill the void left by the departure of last season’s top scorer Carlos Bacca to AC Milan over the summer.

With Los Nervionenses playing in the Champions League this season, Llorente’s experience of playing in Europe will be invaluable for the reigning Europa League champions.

Llorente is a Spain international, and was part of the national team that won the 2010 World Cup and Euro 2012.