Premier League heavyweights have been keeping close tabs on several players plying their trade in Portugal at the moment. 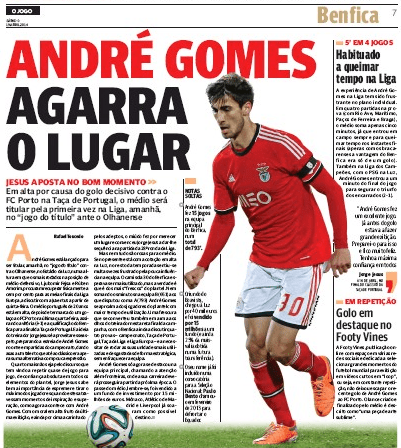 However, Liverpool could also be interested in Benfica’s 20-year-old midfielder, Andre Gomes, who is also thought to be a reported target of Chelsea.

Benfica are currently going through a parlous financial state and just to improve their economic situation, they’ve agreed to sell the economic rights of two of their under-21 internationals to Meriton Capital Limited, a third party investment fund owned by Singapore billionaire Peter Lim.

Gomes is one of them, with other being Rodrigo. Spanish website Fijaches.net claimed back in June that Chelsea are keen to secure the signature of Gomes, who has a release clause of €30m.

However, the latest Portuguese reports say the player is valued at €15m only, with Benfica retaining 25% of his transfer rights.

O Jogo reports today that Liverpool could be a possible destination for the player in the summer. Gomes played a second fiddle to Nemanja Matic throughout the first half of the season, but following the Serbian’s transfer to Chelsea, the Portuguese has been getting regular chances. He has been impressive in the second half of the season and has scored in the semi-final victory for Benfica over Porto.

He is technically sound and has a good passing range. The Reds were linked with the player in the January transfer window as well, but there was nothing concrete about the rumour. Liverpool may need to invest to bolster their midfield next summer and Gomes could be a superb addition to the squad.