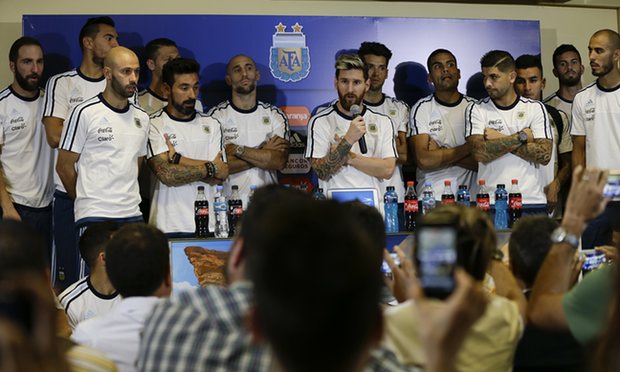 Argentina were given a glimmer of hope of reaching the 2018 World Cup in Russia after Lionel Messi produced a stunning performance to secure his side a 3-0 win over Colombia on Tuesday.

Messi opened the scoring with a spectacular free kick, and later set up goals for Lucas Pratto and Angel di Maria. Argentina now have jumped into the fifth place with 19 points from 12 games, and are back into the qualifying contention.

After the match, Messi led his Argentina squad into a protest against perceived mistreatment by the media and announced they will not speak to the press until further notice.

The Barcelona superstar said in the post-match press conference:

We have made the decision not to talk to the press any more, obviously you know why.

There were a lot of accusations, a lot of disrespect, and the accusations they made against ‘Pocho’ (Lavezzi) are very serious.

We know that most of you guys don’t play that game of disrespect. We can be criticised if we lose, or win, or if we play well or badly. But this is getting into personal lives.

If we don’t put a stop to it now, we’ll never stop it.

The Argentine players have received strong criticism in the past few months from the press over loss of form and poor results. However, this dramatic stance was sparked by a radio report alleging Ezequiel Lavezzi smoked marijuana at the Argentina training ground the day before the crucial qualifier match against Colombia.

Gabriel Angello, a journalist who works for Radio Mitre, had tweeted, “Lavezzi is left off the substitutes’ bench tomorrow because of the joint that was smoked last night in the camp? I’m asking… just asking.”

It was also announced that Lavezzi is set to take legal action against the journalist who accused him on a social media platform without providing any solid evidence.

The entire squad walked out after Messi’s brief message. Check the video below: