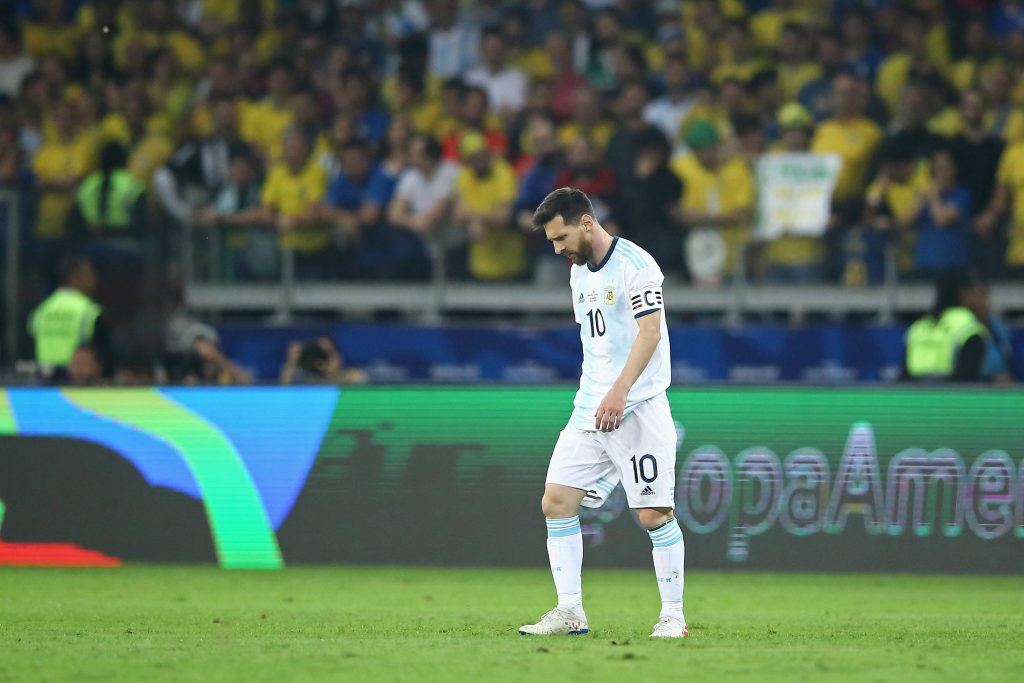 Lionel Messi is one of the greatest footballers ever to live.

However, there is one mark against his near-flawless career – he has been unable to replicate his success with Barcelona on the international stage.

The forward has appeared at eight major tournaments for Argentina and has not won a single one.

For many, this is the difference between Messi and long-standing rival Cristiano Ronaldo, who lifted the Euro 2016 trophy with Portugal five years ago.

Messi turns 34 this month, meaning that he’s running out of time to get that elusive international trophy.

With Argentina’s golden generation of forwards all getting older, this summer’s Copa America could be his last realistic chance.

La Albiceleste have come so close in the past, but can they get over the final hurdle this time around?

The 2007 edition of the Copa America was a breakthrough tournament for Messi on the international stage, scoring two goals and making it into Team of the Tournament.

This included an incredible chip in the semi-finals, which won Goal of the Tournament.

Argentina made it to the final, having enjoyed a dominant campaign. They won all three group games and comfortably swept aside Peru and Mexico in the knockout rounds, scoring 16 goals along the way.

However, they were completely outplayed in the final by Brazil. Julio Baptista made it 1-0 in the fourth minute, and a Roberto Ayala own goal made it two just before half-time.

Dani Alves netted a third in the second half as Brazil won 3-0.

The next Copa America was not so convincing for Messi or Argentina. They were eliminated in the quarter-finals, and the forward failed to score a single goal.

But it all could have been so different with a bit more luck in the tie against Uruguay. Diego Perez bundled in an early goal for La Celeste, but Gonzalo Higuain responded with a header from Messi’s cross.

And, when Perez was given a second yellow card in the first half, Argentina must have fancied themselves to progress.

However, they could not find a second goal, and Javier Mascherano was also sent off just before the full-time whistle.

The match went to a penalty shootout, during which Carlos Tevez was the only player to miss.

Had Sergio Batista’s men gone through, they’d have been in a final four with Peru, Paraguay, and Venezuela.

Given that they were also the hosts, you’d have fancied them to lift the trophy.

The big one. The one that everyone dreams of winning. The World Cup. In 2014, Argentina got so close but fell at the final hurdle.

After eliminating Switzerland, Belgium and Netherlands in the knockout rounds, they faced Germany in the final, who had just battered Brazil 7-1.

They were up against the favourites but had the chances to win the game.

Messi himself had an opportunity to put his side ahead but placed his shot wide. Higuain had a glorious chance in the first half but skewed it horribly off target, and Rodrigo Palacio poked wide when through on goal in extra time.

Then, in the 113th minute, Germany netted a winner after Mario Gotze volleyed home from Andre Schurrle’s cross.

Messi was awarded the Golden Ball, but this would have come as little consolation.

A year after the World Cup heartbreak in Brazil, Argentina had a shot at redemption when they reached the Copa America final.

Having demolished Paraguay 6-1 in the semi-final, they went into the final with hosts Chile as hot favourites.

But once again it was an opportunity missed, as the game finished 0-0.

Right at the death, Higuain had a chance to snatch a winner but somehow put his effort wide at the back post from Ezequiel Lavezzi’s low cross.

That was it. That was the difference between winning and losing.

Higuain’s nightmare final was compounded during the penalty shootout as he blazed his spot-kick over the bar. Ever Banega also missed, and Alexis Sanchez wrapped up the title with a Panenka.

A third successive final came about in 2016, and they had the chance to get revenge on Chile.

But history repeated itself, with Juan Antonio Pizzi’s men claiming victory on penalties after the match finished goalless.

It was a closely fought match, with both sides having chances to open the scoring. Marcelo Diaz and Marcos Rojo were both sent off in the first half, and Higuain missed a golden opportunity for the third year running.

Sergio Aguero twice came close to nicking it for Argentina, firing over late on before having a goal-bound header excellently saved by Claudio Bravo, but the game went to a penalty shootout.

For Messi, this was probably the most heartbreaking moment of his career.

Stepping up first for his side, the Barcelona man blasted his penalty over the crossbar. Lucas Biglia also missed, and Chile scooped their second successive Copa America trophy.

After the game, Messi was in tears and even retired from international football – although he later reversed this decision.

Argentina’s most recent tournament came in 2019, where they reached the semi-finals before being knocked out by Brazil. With this one, they can feel a sense of injustice.

Gabriel Jesus gave the hosts an early lead, but Lionel Scaloni’s side continued to threaten, hitting the post and the crossbar.

Roberto Firmino made it 2-0 in the 71st minute, effectively ending Argentina’s tournament. Replays showed that Aguero was brought down in the build-up by Dani Alves.

And that was not the end of the controversy. Nicolas Otamendi was caught by the elbow of Arthur from a corner, but once again no penalty or red card was given.

Brazil went on to win the tournament, defeating Peru 3-1 in the final. In contrast, Messi was sent off in the third-place play-off after a clash with Gary Medel.