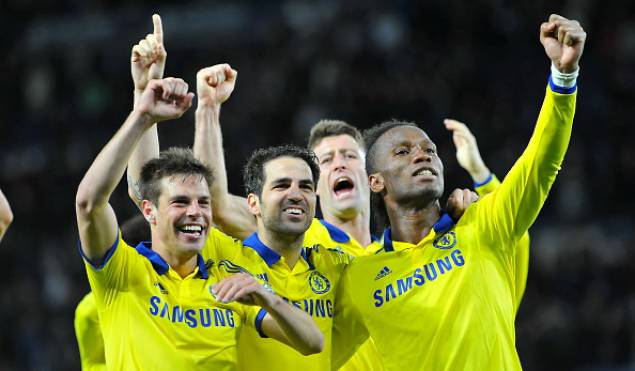 Chelsea are just one win away from securing the Premier League title, after an inspired second-half performance helped them come from behind and beat Leicester City 3-1 at the King Power Stadium.

The home side, who are battling relegation, came into this game on the back of four straight wins and dominated early on. They took the lead right on half-time through Marc Alrighton and looked set for a famous result against the champions-elect. But, Chelsea came out with a slightly different setup in the second period and equalised just two minutes in through Didier Drogba. John Terry then bundled home from close range with 11 minutes to go to make it 2-1, before Ramires unleashed a tracer-bullet into the top-corner to secure the points.

Both sides can take a lot of positives away from this game. While the Foxes are still left with a lot to do, Chelsea are within touching distance of the crown.

Here are some key talking points from the game:

Nigel Pearson has inspired an incredible turnaround in Leicester’s fortunes over the past couple of months. After being bottom for the majority of the season and being favourites to go right back down after last season’s promotion, they are currently sitting in 17th. Even though they are just one point above the bottom three, they have plenty of reason to believe that the great escape is possible.

Out of their four remaining fixtures, three are at home, and these include games against Newcastle United and Queens Park Rangers. They face off against QPR on the last day of the season and if it goes down to the wire, we are in for a dramatic final round.

They can take a lot of heart from their performance last night, as they not only matched, but also dominated Chelsea for periods in the second half. The Blues were far too good after the break, but Leicester are not going to face a team as strong as that in their remaining games.

While Nigel Pearson heaped praise on Jose Mourinho and his side, he rued a couple of early injuries that led to forced substitutions. Andy King and Robert Huth were both taken off within the first half-hour, and this meant that by the time Chelsea took the lead with 10 minutes to go, Pearson had no substitutions left. It was unfortunate to say the least, but that didn’t stop the home side from giving it all they had for the full 90 minutes.

Chelsea started with Cesc Fabregas alongside Nemanja Matic in central midfield, with Ramires on the right and Willian behind the striker. In the first half, their play was far too narrow, and Leicester’s midfield wasn’t stretched at all. The full-backs, Cesar Azpilicueta and Branislav Ivanovic hardly pushed forward.

At half-time, Mourinho changed it. Fabregas went further forward, and Matic maintained a deeper position providing protection to the back 4. This helped John Terry and Gary Cahill to split, and the full-backs to maraud forward. The equaliser came as a result of some good inter-play on the right between Willian and Ivanovic. Chelsea moved the ball a lot better, had lot more possession and looked like scoring every time they went forward.

The following performance chart from Squawka shows how Fabregas’ performance improved in the second half, after he went further forward: 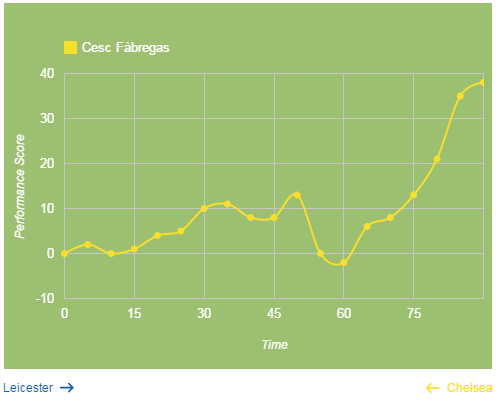 Mourinho was all-smiles after the game, and with good reason. He had once again out-thought and outsmarted the opposition. If he does it once more against Alan Pardew’s Crystal Palace on Sunday, it will seal his 8th league title in 14 years of management. That is, to say the least, a quite phenomenal record.