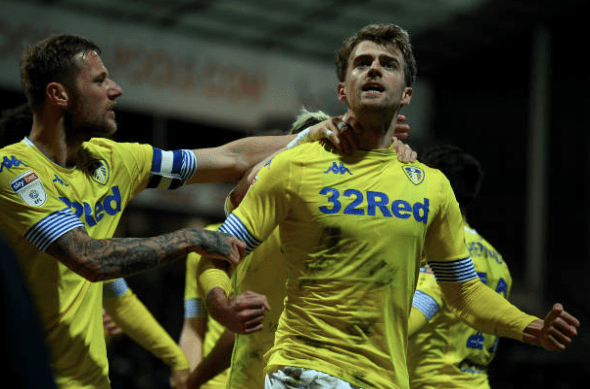 It took him time to win over the fans. But this season, he truly has etched himself as a cult-hero among the Elland Road faithful, mainly through his bundles of energy and an admirable work-rate.

Patrick Bamford went through a goal-drought phase from late August to early November, a span of 10 games, where he was often jeered by the Leeds fans. While fans were demanding Marcelo Bielsa to start with Eddie Nketiah, the Argentine kept faith in the 26-year-old as he felt Bamford brings a lot more to the table.

His decision stands vindicated. As Leeds come away with a 1-1 draw against West Brom at the Hawthorns in the top of the Championship clash on Wednesday, Bamford once again stole the show.

Coming on as a second-half substitute to replace the departing Nketiah, Bamford changed the complexion of the game. His header was deflected in by Albion defender Semi Ajayi as Leeds restored parity after the break.

Bamford was presented a golden opportunity to seal the tie in Whites’ favour right at the end, but his angled shot was kept out by Sam Johnstone.

Anyone doubting how good Bamford is watch this second half again, absolutely outstanding lone striker👏👏👏👏👏👏👏👏

This man. Rightly or wrongly he endured jeers during poor form. He’s bulked up, his work rate is through the roof. He bullies defenders and comes up with some vital goals. He shit houses and frustrates the opposition. What a transformation. Bam Bam Bamford 💥 #lufc pic.twitter.com/WbWPF7NvcW

Give this man a knighthood

Excellent second half, really good. Wonderful substitutions, even Douglas, thought he looked composed. No doubt Bamford on changes how we are as a side.

BAMFORD WHY DIDN’T YOU SQUARE IT!😂#LUFC

Opposition Players see Bamford in our Grey and Pink kit, and already know it’s over pic.twitter.com/dbWvMv8ZBp