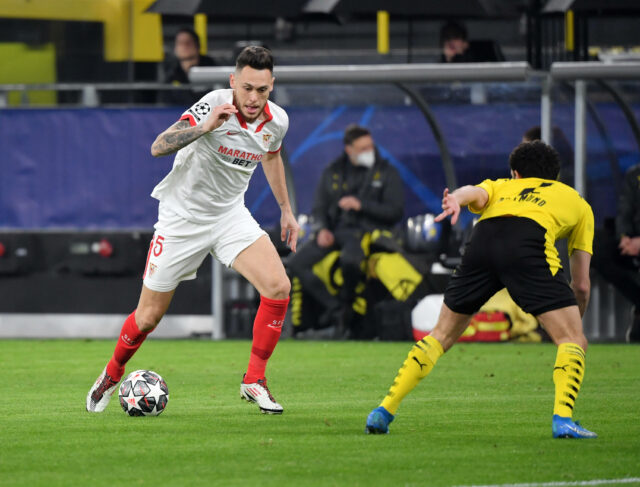 Leeds United fans have taken to Twitter to express their reaction after learning that the Whites are interested in signing Lucas Ocampos from Sevilla.

According to reports from the Daily Mail, the Whites could face competition from Premier League rivals Liverpool this summer.

The 26-year-old has established himself as one of the finest wingers in La Liga since joining the Spanish club from Marseille two years ago.

The Argentine scored 17 goals last season and helped Sevilla win the Europa League. This season, he hasn’t been that prolific but has still managed four goals and four assists in La Liga.

The Mail claims that both Leeds and Liverpool are keen to sign Ocampos in the summer, but the player doesn’t want to leave the club at the moment.

He has a prohibitive £56 million release clause in his Sevilla contract, and interested clubs may struggle to justify that outlay.

Many Leeds fans want to see the winger signed, although there is a feeling that the deal won’t happen. Here are some of the selected tweets:

Yes great – maybe someone can negotiate some discount. 🤔😉

Definitely but even if they didn’t pay the release clause in his contract I would say £40mil at least for him. I think Leeds would only be able to offer a loan with a future obligation to buy. We’ve got other holes to fill right now.

Do we need to spend huge money on unknown talent?
We spent huge money on Rodrigo who hasn't fit in & now wants to leave. Please use our youth talent. Other clubs have young players in first squad. Leeds has in the past. Gerhardt, Summerville, Cresswell, Drameh must be tried now

56 million, no chance, we would be nuts. Rather have 3 Raphina’s of Bielsa’s choosing. Risdale tried this or have we forgotten?
After 16 years of suffering it is good to be giddy but not reckless.

I would love this. Very very good player and is fast. Wonder which side he would play on though with Raphinha being a right winger. But that will be sorted out if we get this guy

The release clause is too much

his performance this season is being rusty compared to last season, the kind of player that needs to show more to move away from this "one season wonder" tag. Also, business with Sevilla is like negotiate with Daniel Levy… they will empty your pocket prior to any agreement