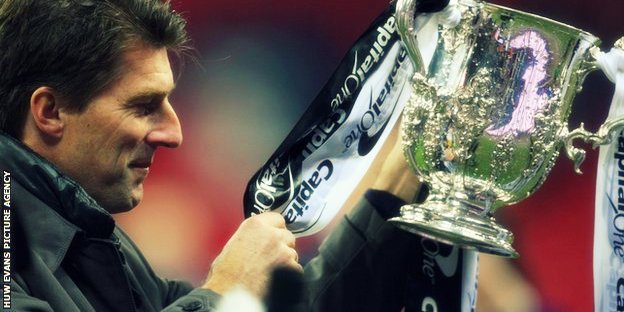 Michael Laudrup has been tipped with summer exits to several top European clubs but his recent comments about summer plans, have hinted that he will stay in Wales.

Laudrup guided Swansea to their first piece of major silverware in over a hundred years, with victory in the League Cup, which creates the question of why he’d want to leave when he’s clearly in the process of building something special.

That win means Swansea will be playing some form of European football next season, which is an area where he can not only improve his managerial skills but test himself against more experienced and higher profile coaches.

He’s created a Swansea side, which has advanced since the days of Brendan Rodgers, losing no small part of their style and still finding the back of the net in games consistently with style.

His comments about the summer have revealed that he is planning transfers, which will help the side advance towards next season. That would be a pointless action to take if he was thinking about leaving for a higher profile side.

He’s also been barrelled into taking questions about some of his more key players such as Ashley Williams, where he has suggested that he will do his utmost to try and keep key players at the club.

Again, that’s another example of something he wouldn’t have to talk about if he knew it was effectively going to be someone else’s problem by the time the summer transfer window opens up.

He also agreed a one-year extension to his current contract with the club earlier this month, which is the biggest giveaway sign yet that he’s not going to be drawn away to possible jobs in England with Everton or Chelsea or a job in Spain, should Jose Mourinho leave Real Madrid.

It’s all positive for Swansea because his profile as a coach this season has improved to the point where he can now attract better players to the side.

Everything points towards forward thinking and improvements. Moving forward each season seems to be the main aim for Laudrup and Swansea chairman Huw Jenkins, who has lead the club brilliantly away from the field.

Why would Jenkins commission a contract extension or allow his manager to talk about summer transfer targets, if he thought there was even the smallest chance that he would walk away and leave the club in a poor situation.

Jenkins has always been a realist during his time at the club and he will be prepared for various offers to poach away his manager but while all parties seem happy, those offers are pointless.

Laudrup isn’t going anywhere, certainly not until his current contract expires in the summer of 2015. Swansea could well be an established top eight Premier League side by that point, which would make a move even then seem a little bizarre.