Barcelona continued their perfect start to their season with their 4-1 victory over Levante on Sunday. Lionel Messi bragged a brace, but the Argentine genius was criticised for missing yet another penalty. Sevilla suffered another home defeat and are now languishing at the bottom of the table.

On Saturday, both the Madrid clubs had picked up full three points, while Valencia managed yet another draw at the Mestalla.

But first let us check all the results from Round 4 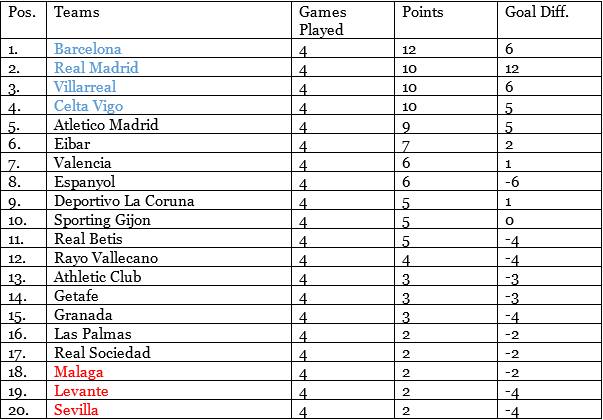 La Liga Top Scorers: After Round 4

Make no mistake Isco is a great talent and he could become a world class player in future, if not already. There’s so much expectations from him that we often tend to forget that he is only 23. Having said that, it’s time for him to make the full use of every minutes available to him, especially when Bale or James Rodriguez is not around. He provided the assist for Benzema’s goal, but apart from that he didn’t have a great game.

Madrid however won’t mind winning ugly. Prior to this match, Madrid have won by 4-0, 6-0 and 5-0 margin against Shakhtar, Espanyol and Real Betis. They were scoring goals for fun and many had expected a similar sort of performance on Saturday. But on this occasion, they weren’t fluid, eye catchy, but highly effective. The defence looked solid than ever, in fact, Madrid are the only team in the top five European leagues who are yet to concede a goal. Rafa magic in works already.

Messi is human after all

The Argentine has missed six of his 44 La Liga spot kicks and 17 of 81 penalties in all competitions during his career, which equates to a conversion rate of 79 percent.

Study reveals that average player converts 77 percent of his penalty kicks. Well, Messi is therefore close being an average player, in terms of taking spot kicks. Barcelona manager doesn’t think so. Luis Enrique doesn’t believe that Messi is ‘human after all’, rather he opines – “There is very little human about Messi”.

If anything Atletico’s 2-0 victory over Eibar has proved, it is their impressive squad depth with a consistent quality level.

Antoine Griezmann is enjoying a great campaign and seems destined for stardom, Torres (scorer of the match) is a player reborn, and Angel Correa (scored against Eibar) is a great young prospect. Jackson Martinez brings Champions League experience and adds an extra dimension to the side. All Simeone needs now is to get the best out of Luciano Vietto, one of La Liga’s rising talents.

At the full time whistle, a loud jeer from the stands was directed towards Valencia boss Nuno Espirito, with the fans frustrated after Los Che were held to another draw at Mestalla.

Valencia dominated the entire match. They had 22 attempts on target, 13 of them came from open plays, and created so many goal scoring opportunities from set pieces, but it is their poor finishing once again that let them down.

Villarreal’s third win in a row, Sevilla bottom of the table

After winning against Espanyol and Granada, it was time for Athletic Bilbao to be Villarreal’s next victim. Simply, the Basque side were no match to the yellow submarine at El Madrigal.

Like Nuno Espirito, pressure is slowly mounting on Sevilla manager Unai Emery. The Andalusian club are in all kind of mess. Having failed to win a single game so far, Sevilla are struggling badly on injury front, with the likes of Banega, Beto, Cariço and Adil Rami all spending time in the treatment room.