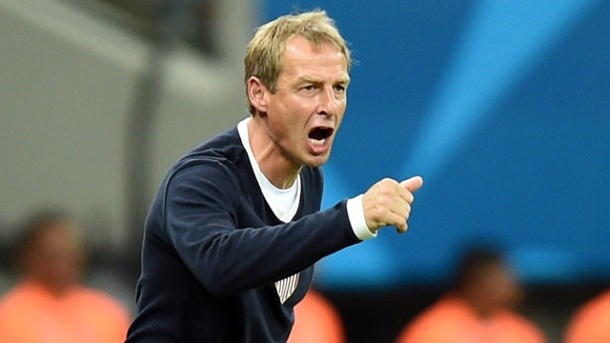 Coming into the 2014 FIFA World Cup, all the talk in the American camp was the exclusion of all-time leading goal scorer and assist maker, Landon Donovan. The striker was surprisingly excluded from the final squad after initially making the preliminary one. Many media outlets and experts questioned Klinsmann peculiar decision, with many raising doubts about his ability to lead the USMNT into a World Cup. Expectations were staggeringly low, the squad looked weak & inexperienced, but the enthusiasm remained.

After two games in the World Cup which has seen the Americans take four points and so nearly getting six, more than anyone else imagined, the doubts have been subdued. It’s been an impressive performance, but an equally surprising one. They now face the possibility of a shock round of 16 berth with as little as a draw against Germany, while even a loss may put them through.

What we can infer from the two games for certain is that Jurgen Klinsmann knows what he’s doing. He isn’t the clueless head coach that he was among the media heading into the tournament, but in stead bears the image of a smart & passionate tactician. The biggest evidence of this is with his midfield set-up.

USA’s opening game was a narrow 2-1 win over Ghana with Dempsey scoring in the opening seconds and Brooks sealing it in the last 10 minutes. Although it would be unfair to say the US were in complete control as the Africans had a lot of the ball and the chances, the early goal allowed the US settle into a comfortable system which granted Ghana ball possession.

Klinsmann set his side out with a diamond formation, with Real Salt Lake’s Kyle Beckerman the deepest midfielder. Alejandro Bedoya and ex-German international, Jermaine Jones, are on either side of Beckerman in an advanced position, while ex-Roma man Michael Bradley is at the tip of the diamond.

The set-up showed how well Klismann had studied his opposition. As explained here, Ghana are a side relying on their ability to counter with quick transitions and a dependence on their superiority out-wide. With this in mind, Klinsmann opted for this diamond system as Jones & Bedoya played the key role to ensure it’s success. Their primary duty in the system was to contain the advancement of both Ghana’s full-backs and their wide men. They were constantly pushing up and down on either flank, in a defensive capacity.

This certainly helped in preventing Ghana from having a more telling influence in attack with the US nullifying their effectiveness. Ghana still continued to pressure from the wings, whipping crosses in but never having any space to work the flanks due to the presence of the midfielders.

Klinsmann again showed his tactical ability, analysing Portugal’s strengths and taking measures to counter it. Another early goal followed in this game with Portugal this time on the scoresheet, but it was all USA since then. Though it has to be said that it was the right side of the pitch that was being exploited by the Americans, their midfield set-up helped them in ensuring that the Portuguese were kept under control.

What Klinsmann realised was the need to ensure the midfield aren’t able to connect with the attack as neither Nani and an unfit Ronaldo will be of much danger without service. They aren’t ones to necessarily force deeper to influence play, while the lone striker upfront is meant to play as a typical centre forward.

The US shifted from the diamond to a system that added more men in deep areas in midfield. This essentially increased the gap between midfield & attack, preventing regular connection while also forcing lack of creativity between the lines. Thus neither were Portugal’s three central midfielders able to supply the attack, neither were they able to take the ball forward themselves.

Though Portugal scored 2 goals and got a point, with one goal coming in right at the start and the last at the latest possible time, the match in between was dominated by USA with almost nothing from the Portuguese.

The US now have an incredible opportunity to make it to the next round with an intriguing game against Germany. Viewers will be looking forward to seeing how Klinsmann sets his midfield up, chances are that the same system witnessed against Portugal will remain against his ex-assistant, Joachim Low.