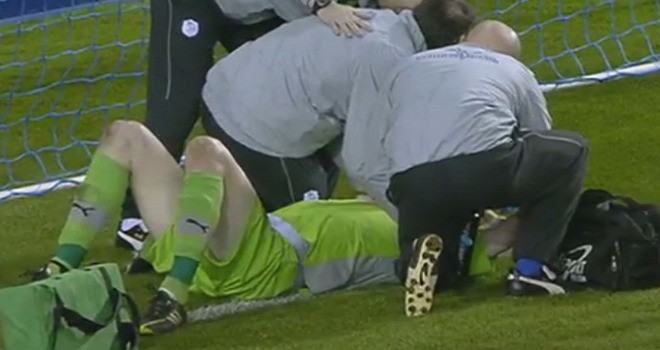 An Arrest has been made in connection with the ugly incident which took place during Friday nights fiesty Yorkshire derby between Sheffield Wednesday and Leeds United.

Gloucestershire Police have announced that a 21-year-old man from Cheltenham was arrested on suspicion of assault shortly before 1pm on Sunday after a Leeds fan ran onto the pitch and shoved Owls keeper Chris Kirkland in the face following his teams equaliser in the 77th minute of the Championship clash.

Kirkland, 31, who required treatment on the pitch, spoke to the BBC afterwards and was clearly still in shock by the attack, the ex-England stopper said:

“After conceding the goal, I was looking at the ground but when I looked up, I caught a glimpse of someone coming towards me. I thought he was going to give me some abuse but then suddenly he came at me with both hands and I was stunned – you never know what could have been in his hands.

“I want the authorities to look at what happened and take the appropriate action because sooner or later, we could be talking about something even more serious.”

Following the game, which ended 1-1, both managers expressed their disgust on the matter with Wednesday boss Dave Jones claiming the supporter should be banned from all away games. Telling BBC Radio 5 Live he quipped:

“They should be banned from every away ground if they’re going to behave like that. I thought those days had gone 15 or 20 years ago. They should be punished. I’ve had it for 12 years and it is just upsetting that they are able to do it.