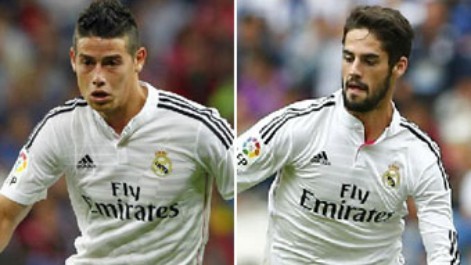 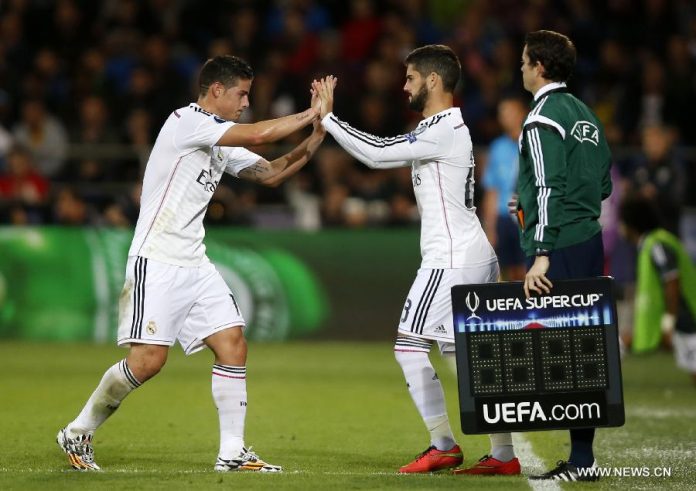 A Real Madrid predicted line-up often has an irregularity. The third midfielder. Often, (before Luka Modric was out injured) the midfield would go Toni Kroos, Luka Modric, Isco/James Rodriguez. There has been no definitive winner over first pick, although James had started 6 more times. Yet, the Madridstas remain split over their favourite playmaker. Who’s the best choice for Carlo Ancelotti from the first half of the season?

Francisco “Isco” Alarcon arrived at the Bernabeu on the 1st July, 2013 for £22 million. After a strong season last year, the 22 year old from Spain was keen to impress, and book his place in a star studded starting line-up that included Cristiano Ronaldo and Gareth Bale. He’s taken the challenge by the scruff of the neck, delighting Madrid fans with his performances and flair.

Ancelotti has demanded work rate from his key players and Isco has listened, showing a burning desire to chase every ball, win every ball, and create chances. His desire to make things happen is what’s impressed me most this season. When players pick the ball up, and look to take players on, they stick to the line, and slow down. Isco does the opposite. With his unbelievable first touch, he has the ball out of his feet in a flash. Then, he runs at defences through the middle of the park. He is very, very direct. The ball seems to be glued to his feet as he runs at full pace straight at the opposition, gliding by players, with deft touches and pace the defence just simply can’t handle at times. He takes players out of the game, and makes space for the inside forwards running in behind. Furthermore, he makes playing a killer pass look easy. Very Spanish. And when you’ve put one of the BBC in front of the keeper, it doesn’t take an expert to know what happens next. With his dribbles, Isco often runs inside to the middle of the pitch, dragging players towards him, leaving space open for Ronaldo and Bale to run into.

However, for a player who often has to press the opposition wide, and offer width without the ball when Ronaldo and Bale make runs through the middle, you need an accomplished crosser, and so far, Isco hasn’t shown that. His best play has been through the middle, and while this is not necessarily a bad thing because of how narrow the front three in the 4-3-3 are, the freedom he is given means he needs to be dangerous wide as well, and he can’t always cut in before it becomes predictable. Also, despite his work rate he isn’t making enough tackles or interceptions to be solid defensively.

The World Cup star. Stunning audiences with fluid, flowing football, Colombia were one of the teams to remember in Brazil 2014, and James Rodriguez was at the forefront of it all. I’m sure no-one will forget the Puskas Award winning strike against Uruguay, and nor did Florentino Perez, signing the young star for £60 million. Many thought he’d crumble under the pressure, and others thought the fee too much.

James Rodriguez has thrived under the pressure. He has thrilled the Bernabeu with some magical ‘golazos’ at times, and fits the bill of a Real Madrid star. Exciting, expensive, and has plenty of ‘swagger’.

His immense technique gives him a real edge on the field, displaying a fantastic range of passing, able to switch the ball to the other flank, and the space with ease, as well as short, sharp possession passes. Furthermore, as you can see from the stats, he often plays precise key passes, and when you’re guaranteed 2 key passes a game, and have a certain Ronaldo on your team receiving them, in one word – lethal. Also, when you have a midfield three of Rodriguez, Modric, and Kroos who are all capable of playing an accurate pass wherever they want on the pitch, you are bound to control games. Having great technique means you can do what you like kicking the ball, and this makes him a quality passer, crosser, set-piece deliverer, and shooter. Then there’s the goalscoring, here, again his technique comes into play. I’d invite you to watch some of his goals on https://www.youtube.com/watch?v=rtkuy3pZJMY, as he has a knack for scoring goals that make you go “wow”. He’s got the confidence to try some of these shots, showing he’s not succumbing to the pressure to keep up his World Cup performance and his price tag, and what’s more – he’s pulling them off.

However, on defence, James is too easy to go past. Without the physicality or the anticipation to be strong in the tackle, he’s often outmuscled, and attackers drift past him, which can prove very costly in the big Champions League games. Also, although his technique is superb – so is that of Luka Modric and Toni Kroos – do you need something different to the team, a direct dribbler, like, Isco? James has a great pair of feet to get himself out of trouble, but so does Modric and Kroos, and he isn’t direct enough to take players out of the game completely, and the team can be a bit less dynamic for it.

They are two very similar players. Short, agile and fast. They can play a pass, and dance past defenders. They can both score. They are both a weakness in defence at times as well. Therefore, you have to look at what they offer to the super-team Real Madrid are lucky enough to have, to the players around them. Isco dribbles past players, he creates space, and can create opportunities when the team looks flat. But he lays the ball off too much, instead of taking a risk and playing that killer ball. James doesn’t offer that explosive energy, but he feeds the BBC efficiently, and can score from anywhere. Now considering the BBC had scored 108 of Madrid’s goals last year, the vast majority of goals scored by Los Blancos come from them, and if it’s not Bale, Benzema, or Cristiano scoring, it’s James Rodriguez, so you have to look at the base of football. The BBC score goals, and football is about scoring goals. The team who puts the ball in the back of the net, wins, and out of the two, although both brilliant players, James creates the most goals. It happens to many teams, they play well, but they can’t get the ball in the back of the net. Sometimes they need more than heroic dribbles, they need key passes, and one on one opportunities, and James Rodriguez is the man to provide that.