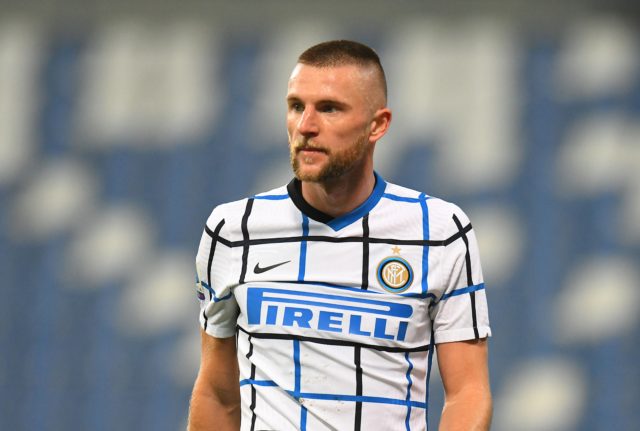 Inter Milan recently announced the surprise departure of manager Antonio Conte by mutual consent after a disagreement over the club’s transfer strategy.

The Italian wanted to bolster the squad on the back of their first Serie A title in 11 years, but the hierarchy stated that they needed to balance their books with player sales.

The decision did not go well with the former Chelsea boss, who has now parted company. Alongside fans, the players are also said to be distraught over the manager’s departure.

The club need to recover losses of €70-80 million before the financial year ends. There could be more than one high-profile player heading for the exit door.

We look at Inter players, who could be on the radar of Premier League clubs this summer.

The Belgian was pivotal to ending the Nerazzurri’s 11-year wait for the Scudetto. He netted 30 goals in all competitions, including 24 in Serie A.

Lukaku’s decision to join the San Siro outfit was due to the presence of Conte, who previously failed to sign him for Chelsea in 2017.

With the Italian’s departure, he may be assessing his options, and a return to the Premier League could be on the cards this summer.

The Blues are looking for a world-class striker this summer with their struggles to convert chances into regular goals this term.

Thomas Tuchel is a huge admirer of Lukaku while the Blues are also interested in signing the striker, who was with them for three years.

The west London club are lining up a €75.5m bid for the 28-year-old, who has already made 252 appearances in the English top-flight.

The versatile right-back/right wing-back had an impressive debut season, registering seven goals and 11 assists from 45 appearances.

Despite this, there has been much talk regarding his future. Earlier this year, the club failed to pay the first instalment for his transfer from Real Madrid.

It was claimed that the Moroccan would be open to a move to England. He could be available for around €46.5m if Inter make him available for sale.

Both London clubs were interested in Hakimi before he made the switch to Inter. However, the Gunners appear the likely candidates to pursue his signature this summer.

The Blues have settled with Cesar Azpilicueta and Reece James, and any move may depend on one of them heading for the exit door, which appears unlikely.

Meanwhile, the Gunners are desperate for an attacking right-back. They used Hector Bellerin, Cedric Soares and Calum Chambers in the role this season.

Bellerin appears set for an exit, and Hakimi’s deal could be part-funded by his departure. The big question mark is whether Hakimi will join them without European football.

The Slovakian is regarded as one of the best centre-backs in Serie A, and he played a starring role across the back three for the Nerazzurri.

The 26-year-old rarely loses possession with his strong ball-playing abilities, while he is also good with his defensive decisions in the box.

He has another two years remaining on his Inter contract and could be on the move this summer if he turns down a possible extension.

The north Londoners are long-term admirers of the former Sampdoria man and were linked with him earlier this year when Jose Mourinho was their manager.

Spurs have a world-class attack at their disposal with Harry Kane and Heung-min Son, but their defensive record has often let them down.

They need a centre-back of the calibre of Liverpool’s Virgil van Dijk or Manchester City’s Ruben Dias to give themselves a chance to compete for the title.

Skriniar could be that player for Spurs. He could cost them €79m. Investment in the right players this summer could also convince Kane to stay.

The Argentine’s future was a regular topic of discussion last summer, where he was regularly linked with a move to Barcelona.

Their interest appears to have faded. The Catalan giants are currently on the cusp of signing Manchester City’s Sergio Aguero on a free transfer.

Despite this, he could be of interest to other elite European clubs after bagging 19 goals and 11 assists from 48 appearances in the recent campaign.

The Premier League champions are expected to land a new striker this summer, with Aguero leaving them when his contract expires next month.

Tottenham Hotspur’s Harry Kane has emerged as the top target, but they may want an alternative if the England international remains with Spurs.

Martinez has previously been linked with them, but he won’t come on the cheap. Inter were reluctant to accept anything less than his €111m release clause last summer.