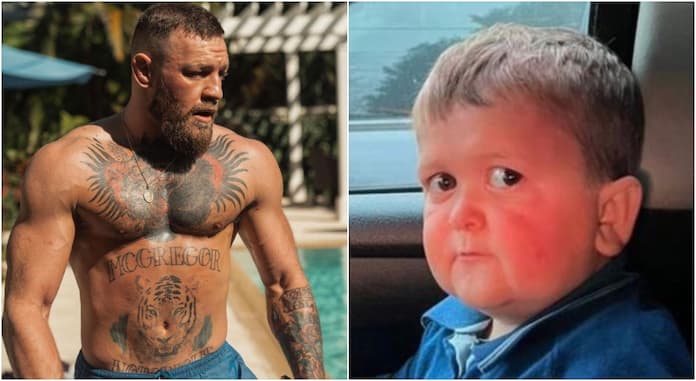 After calling out Hasbulla to a sparring match on Twitter, Conor McGregor has deleted his tweet. However, Hasbulla hasn’t forgotten about it, and is up for sparring the former two-weight UFC champion with “big gloves” on.

Possibly one of the strangest social media altercations in recent time as internet star Hasbulla accepts Conor McGregor’s invitation to a sparring match.

Former two-weight UFC champion, winning belts in both the featherweight and lightweight division, Conor McGregor, sent out a tweet aimed at Hasbulla. The Irishman was offering the internet star to a sparring match, and said they would use “big gloves”.

Hasbulla, who suffers with growth hormone deficiency (GHD), rose to fame in the past year or two with his funny internet videos. The Russian is of course good friends with McGregor’s former bitter rival, Khabib Nurmagomedov.

The pair have been trading verbal blows on social media for some time now, with McGregor having the first word a few weeks ago. ‘The Notorious’ labelled Hasbulla a “smelly little inbred”, causing the internet star to become outraged.

Hasbulla demanded that UFC President, Dana White, let him fight McGregor in the cage. The Irishman hasn’t fought in the octagon since his defeat to Dustin Poirier last year, where he suffered a broken leg during the fight.

Here is what McGregor said to Hasbulla when calling him out on Twitter:

This is what I’ve been waiting for, as usual it’s deleted😂😂@TheNotoriousMMA just @ me and leave the tweet up pic.twitter.com/NMKq6fVnji

McGregor has in fact now deleted the tweet, which has added fuel to the fire here between him and his Russian foe, Hasbulla.

The 19-year-old internet sensation has risen to the challenge and is willing to accept McGregor’s offer.

There has been talk that Hasbulla may indeed step into the octagon soon. Hasbulla want to settle his long-term feud with Abdu Rozik in a UFC fight, but kingpin White doesn’t see it happening anytime soon.

However, with that being said, the Russian has only recently signed lucrative UFC deal to appear as a media representative. It does remain unlikely of course that he appears inside the octagon.

Hasbulla shot to fame when a video of him got over three billion views online, which has helped him accumulate over three million followers on Instagram.

There have been previous altercations between Hasbulla and Conor McGregor of course, this just happens to be the most recent one. Not long ago, Hasbulla called out McGregor saying:

“I have my UFC contract now, if Conor McGregor is really a man… see me in Abu Dhabi. Got smashed by Khabib already. Guess his money from Mayweather ran out and he needs more attention“.

In typical McGregor fashion, he responded simply by saying, “Now what you saying you little gimp,” with a photo of a Hasbulla’s face photoshopped onto a children’s toy.

This is just the latest saga between McGregor and Hasbulla, and who knows when it might all end. Will they face each other in the octagon? We highly doubt it.