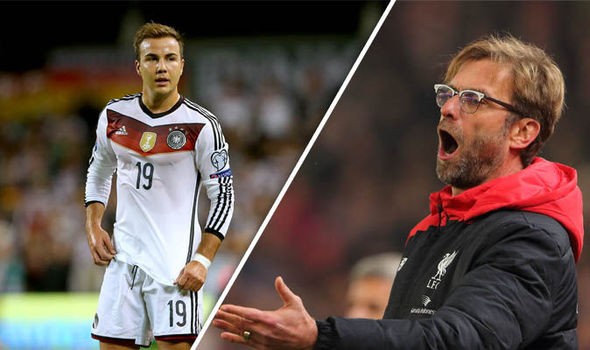 Speculation has been fuelled surrounding Bayern Munich star Mario Gotze and his future at the club after admitting that he would like to work with Liverpool boss Jurgen Klopp again one day.

The German midfielder has been priced at £37 million by the Bundesliga champions and is only under contract until 2017. This leads us to believe Liverpool could make a bid with the move meaning Gotze and Klopp would re-unite after working together for 3 years at Borussia Dortmund. Many reports have played down Liverpool’s chances of signing the 2014 World Cup winner as Gotze apparently wanted to see what his role would be under Pep Guardiola’s successor Carlo Ancelotti in the summer but the story has been given a breath of fresh air.

“I have not heard anything. You should ask Klopp if he wants me at Liverpool.” Gotze stated at the club’s winter training camp in Qatar. “If he wants me, he should approach me.”

German newspaper “Bild”, also had an interview with the 23-year-old in which he said, “I know Klopp really well, our cooperation was outstanding,” He followed on to say, “He is definitely a very good coach.”

Liverpool currently have a number of attacking midfielders including Phillippe Coutinho, Roberto Firmino, James Milner, Jordan Ibe and Adam Lallana among a whole host of youth players waiting in the wings but I’m sure Liverpool will find room somewhere for Gotze as the Reds can’t afford to turn down world-class talent when it comes knocking.