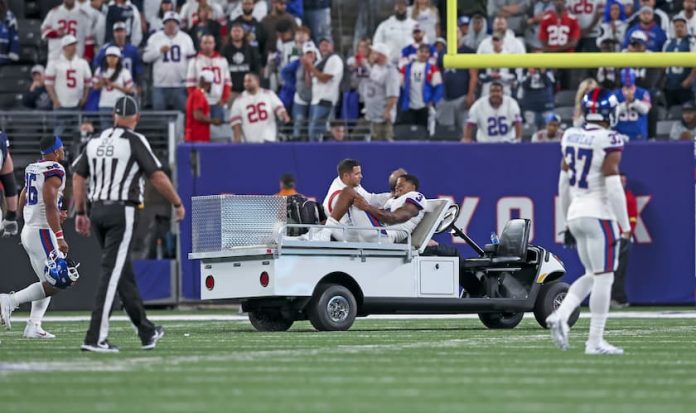 Giants wide receiver Sterling Shepard had to be carted off the field after the team’s final offensive snap of Monday night’s game. It is feared that his injury will be season-ending.

The non-contact injury happened in the final minutes of the Giants 23-16 loss to the Cowboys. A final diagnosis will come later on Tuesday morning, when Shepard undergoes more tests.

The Giants head coach Brian Daboll said it’s hard to see this injury on Shepard after he worked so hard to come back from a torn Achilles that ended his 2021 season: “It’s tough. It’s a tough sport, guys work their butts off to get back from injuries.

Giants quarterback Daniel Jones shared his sympathy for Shepard following the game: “Hate to see that for him, no one deserves that, but especially not him. He works his tail off and means a ton for this team, for all of us.”

Shepard has had a heavy workload on his shoulders at the start of this season and was given a maintenance day on Wednesday as a result of this. Fans will be hoping the wide receiver hasn’t gotten this injury due to being overworked.

Shepard is leading the Giants with 154 receiving yards this season and his leadership and veteran status with the club will be greatly missed for the rest of the season.